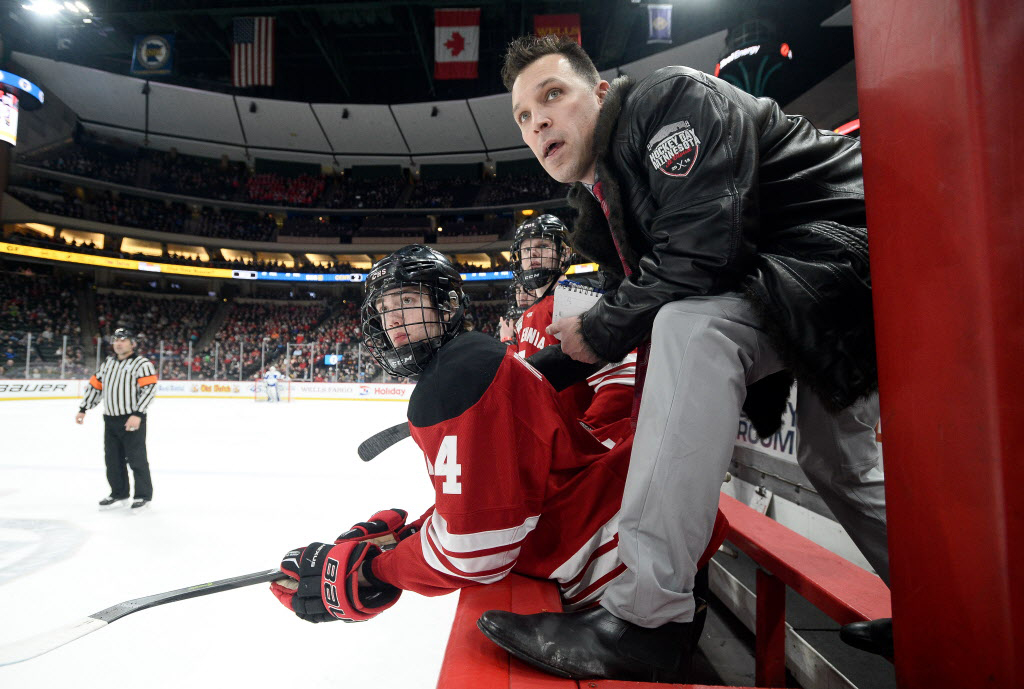 Providing stats, news, notes and juicy insider tidbits for television broadcasters and other media members doesn’t fall into the wheelhouse of most state tournament entrants.

Consider Centennial a notable exception. Everything you could possibly want to know about the Cougars -- including an affinity for Motley Crue, the birthplace of one stylish leather/fur jacket, and the origin of the nickname “Grease Monkeys” for one of the team’s forward lines -- can be found in what assistant coach Ted Cheesebrough calls his “media pack.” 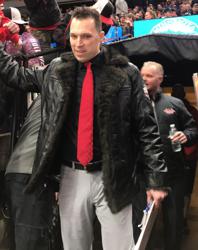 A corporate lawyer by day and coach by afternoon and night, Cheesebrough might very well have been a public relations whiz or marketing mogul in a past (or future) life. You don’t just get a sense for what Centennial is all about after reading Cheesebrough’s dissertation on this year’s players and coaches and their myriad activities, you feel like you’ve spent a season or two in the Cougars’ locker room.

Of the four Centennial varsity coaches, three played for Centennial many years ago (Menne ’90, Johnson ’92, Cheesebrough ’92  -- the three behind the bench), while the fourth varsity coach, Gary Tolkinen, coached all of them as Centennial high school players, as he is in his 31st year behind the Centennial bench.  So there is a very loyal and homegrown feel among the Centennial staff.  (And, as Ritch mentioned, Centennial assistant coach Scott Kranz (CHS, ’90) is also a former Centennial player and captain.)

When Motley Crue came to the Xcel Energy Center for their farewell tour, all of the Centennial Coaches and their wives attended together as a massive group.

Centennial is the best-traveled team in Minnesota High School hockey.  Last summer, we travelled to New York City, where we: went undefeated in four games, stayed at a hotel in Times Square, visited the 9/11 Memorial and Museum, took a boat tour around Manhattan, saw a Yankee game, went to the sold-out Kendrick Lamar concert at Barclays Center in Brooklyn, visited the Museum of Modern Art, hooped it up/played street ball in NYC, and swam at the ocean out on Long Island.  Every junior and senior on our roster went on this trip and you could probably get great sound bites from some of them.  (We could provide great images from this trip if necessary.)

The previous summer (2016), we travelled to Colorado, where we: went undefeated in four games (including defeating the Colorado state champions), were hosted by (and skated with) two members of the Colorado Avalanche staff (who joined us for our practice on their ice), toured the University of Denver and visited with their coaching staff, went white water rafting, fly fishing, and horseback riding in the Rocky Mountains.  (Again, almost every player on our current varsity team was on this trip, and we could provide great images/soundbites if necessary.)

Here’s a story that WCCO did on us last year:

Ritch has even deeper Centennial roots. His grandpa was the school janitor at Centennial High School when it opened in 1958.  Ritch’s aunt, Lavonne Menne, was the Homecoming Queen at Centennial in the 1960’s, and Ritch, himself, was the Homecoming King in 1989.  As Ritch mentioned, his middle son, Jack, is a senior on this year’s team.  Ritch’s oldest son, Richie played for us and graduated in 2015.  And Ritch’s youngest son, Sam, is currently in 7th grade and is on the Centennial AA PeeWees.

By day, the four Cougar coaches represent a nice cross-section of the working world. Ritch Menne is a salesman, Chris Johnson is an engineer, Gary Tolkinen is a middle school teacher, and Ted Cheesebrough is a lawyer.

A.  Here, we will pull back the curtain and give you a few behind-the-scenes items with our team:

1.  One video opportunity will present itself for you during our pre-game. After Coach Menne’s final pre-game comments, our team does a roll call for that night’s starting line-up – the entire team responds and it ties into the dog tags that the guys wear which show each player’s name/number on one side and our “If one of us goes to war, we all go to war” mantra.

2.  Pictures of those dog tags are attached.  The coaches wear the dog tags, too, and the coaches who are Centennial alumni (and all of whom were Centennial “Chiefs”) have their initials and year on theirs.

3.  We divide the entire year into Mini-Seasons, we set goals for those Mini-Seasons, and then we review each Mini-Season and how we did with our goals, and flush that Mini-Season after it’s over, and move onto the next one.  So we have those team meetings approximately every 3 weeks during the year

So far this year, we’ve had the following:

And this weekend is Season 7:  “March. Together. Forever.”   vs St. Thomas, Tonka/Hill, East/Edina/LVN/STMA

B.  Finally, I’ll be rocking my custom leather/fur Hockey Day Minnesota coaching jacket – which was custom-made in Dubai and which arrived safely from the United Arab Emirates in January to make its debut in our outdoor game vs Moorhead!  The coat was designed partially in homage to “Reg Dunlop” (Paul Newman), Player Coach of the Charlestown Chiefs in “Slapshot.”

And here are some of our players’ nicknames and some nicknames for a couple of our forward lines:

Names of forward lines:
The McGregor-Menne-Wagner line is the “Global Warming Line” because they are burning up the Ozone (that is, the Offensive Zone).
The Kanner-Brickner-Stuart line are the “Grease Monkeys” because two of the three are in the same Small Engines/Shop class at Centennial High School.
The Hermes-Pierson-Nelson line is the “Wild” – because their practice jerseys are Green and Red.

Name of a seldom-occurring D pairing:
Occasionally, when games get a little rough and we wish to have a more physical presence on the blue line, we send out #5 Weiss and #7 Francis, together – and when Weiss & Francis go as a defensive pairing, they are collectively called “Destructo.”