The Spartans clipped the Cardinals 2-1 to clinch their first state title. 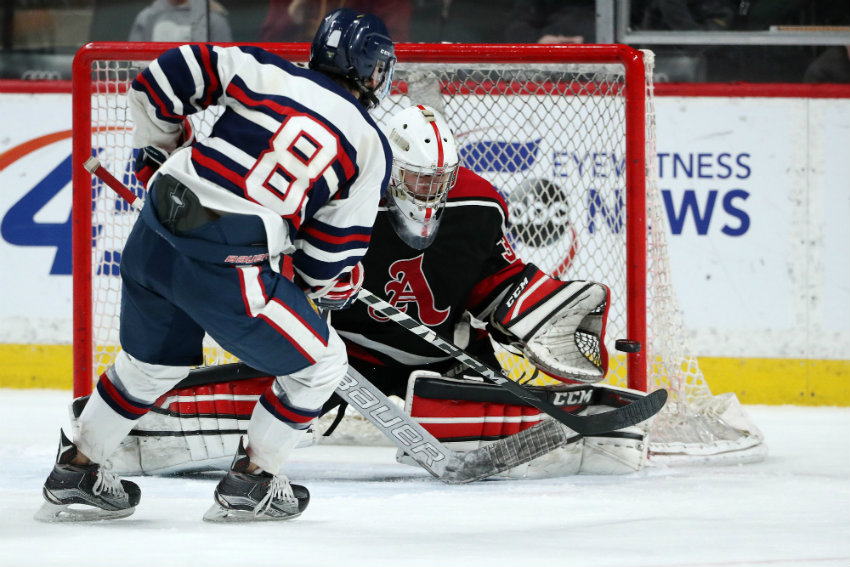 Orono goaltender Evan Babekuhl ripped off his facemask and heaved it skyward even as the scoreboard hadn't finished counting down to zero.

Never mind that it was a one-goal game and the puck was within spitting distance of the net.

Why not start the victory party early?

“We have kind of been waiting for this for a long time,” Orono senior Thomas Walker said on Saturday after the No. 3-seeded Spartans won their first state hockey championship by beating No. 4 seed Alexandria 2-1 in the Class 1A title game at the Xcel Energy Center in St. Paul.

The celebration was still in full swing during the postgame media session. With hoarse head coach Will Scholz to his left and the Spartans’ winning-goal-scoring hero Landon Wittenberg to his right, Walker plopped the state championship trophy on a table at the front of the interview room and asked with a grin, “I’m not blocking anyone’s view, am I?”

It was that kind of feel-good afternoon for Orono (23-7-1), which overcame a sputtering power play to otherwise make all the right moves, including pouncing on the game’s best bounce, en route to its first title in nine state tournament appearances.

“You dream about this forever,” said Walker, who contributed the game-opening goal.

The winning goal came courtesy of an errant shot by defenseman Jack Kubitz. The puck caromed off the boards behind the Alexandria goal and onto the stick of Wittenberg, a junior forward who found himself staring at an open net while stationed near the crease.

“I just hammered it as hard I could,” Wittenberg said. “And left no doubt.”

Wittenberg, Walker and Scholz all nodded their heads in agreement when asked if Kubitz was likely to claim he planned all along for his missed shot to be a pass.

“Knowing him, he definitely did it on purpose,” Walker said.

Alexandria goaltender Jackson Boline, who made 25 saves, was well aware that crazy bounces off the lively Xcel boards are to be expected.

“I knew all weekend that those boards were wild,” Boline said. “(Pucks) are easy for them to hop off like that. And it just got me.”

Alexandria (19-11-1) tied the score at 1 in a back-and-forth first on a goal by Jack Westlund. The shots were even at nine apiece heading into the second, when the Cardinals were whistled for four of their five consecutive penalties. Orono, which had an 11-1 advantage in shots in the second, went 0-for-5 on the power play but, by the third period, appeared to have drained the energy out of Alexandria. 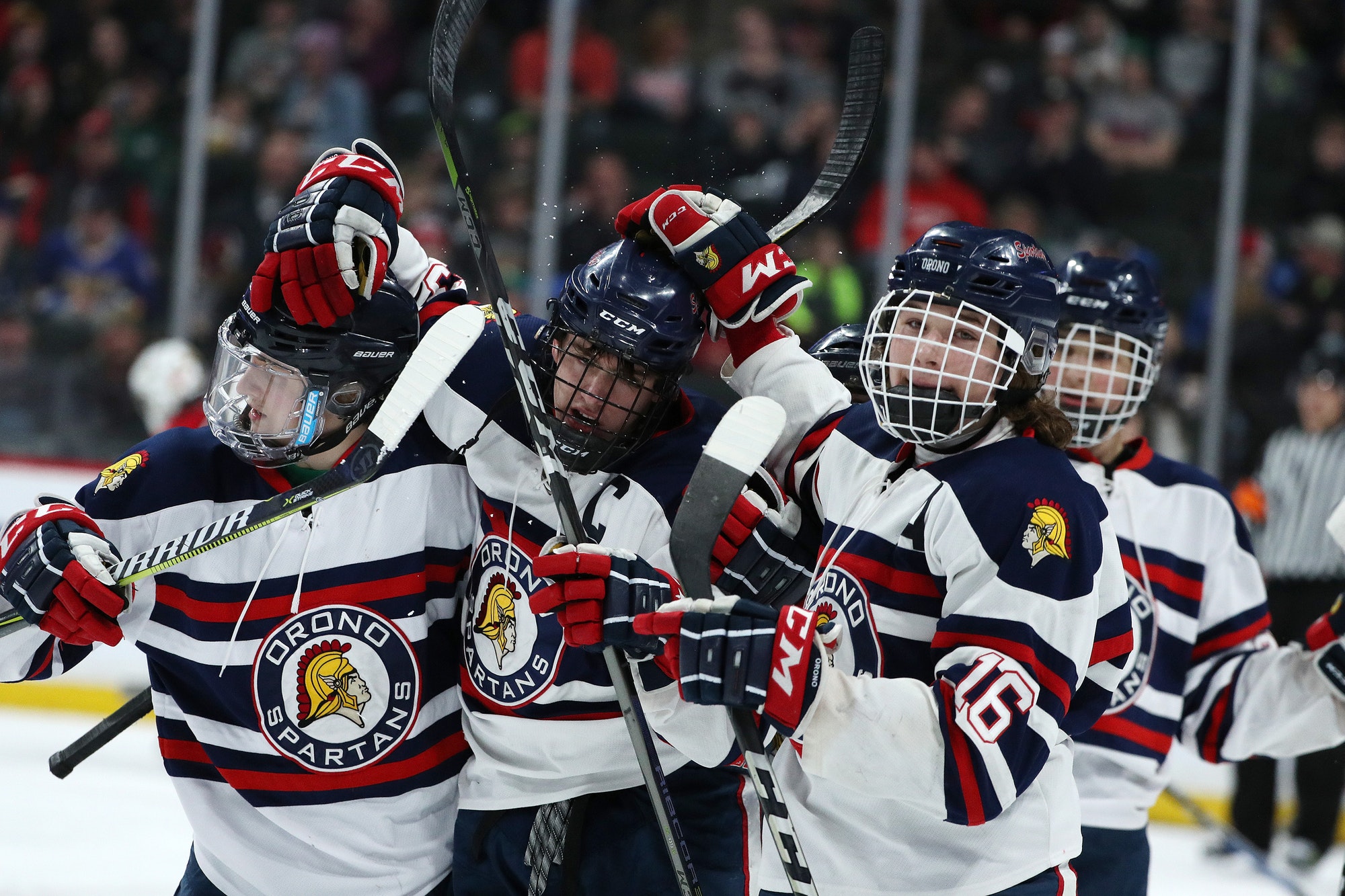 Orono forward Thomas Walker (23) celebrated with his teammates after scoring in the first period. Star Tribune photo by Anthony Souffle

He helped the Spartans secure their first championship in the third period by slamming a crazy carom off the end boards into a gaping net for the winning goal. The center also was a master in the faceoff circle, winning 11 of 12 draws

He energized the Spartans with the opening goal in the first period, his fourth of the tournament. He played his captain’s role to the hilt, too, encouraging his teammates to play aggressive despite protecting a one-goal lead for much of the third.

The goaltender needed to be razor sharp for his third game in as many days, this time standing tall while under siege during five consecutive Orono power plays (Alexandria killed them all). Boline finished with 25 saves.

Junior Landon Wittenberg’s third-period goal boosted No. 3 seed Orono past No. 4 seed Alexandria 2-1 on Saturday in the state Class 1A championship game at the Xcel Energy Center in St. Paul.

The title is the Spartans’ first in nine state tournament appearances.

Wittenberg’s goal came after a shot by defenseman Jack Kubitz missed the net wide but caromed off the end board behind the goal and back toward the crease area on the other side. An alert Wittenberg quickly corralled the puck and popped it past Alexandria goaltender Jackson Boline.

Orono’s Thomas Walker opened the scoring 7:18 into the first period. Alexandria tied it at 1 in the first on a goal by Jack Westlund with 1:53 remaining.

The shots were even at nine after the first period, but Alexandria (19-11-1) was outshot 11-1 in a scoreless second when it was called for four penalties.

Boline finished with 25 saves while Orono’s Evan Babekuhl had 15. 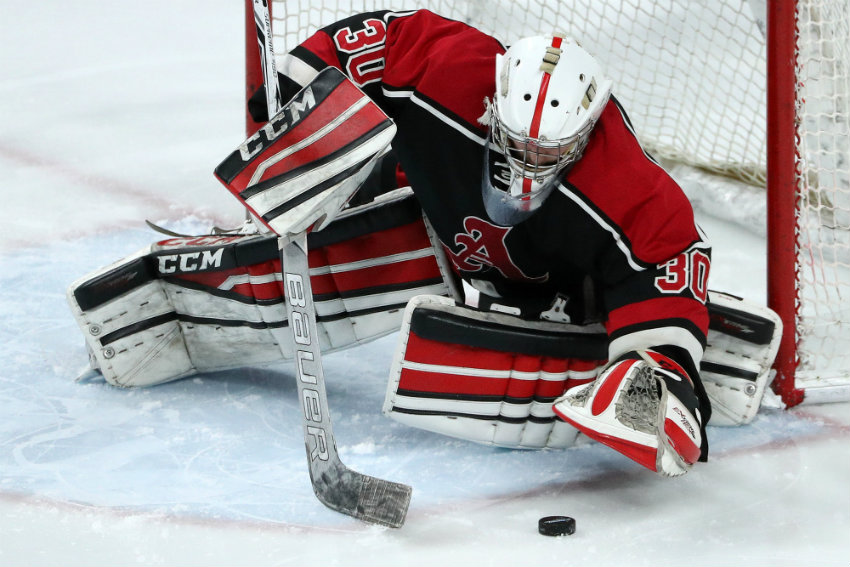 Alexandria goaltender Jackson Boline (30) smothered the puck in the second period during the Cardinals' 2-1 loss to the Spartans. Star Tribune photo by Anthony Souffle