The Skippers shed their hard-luck past with an ultimate triumph. 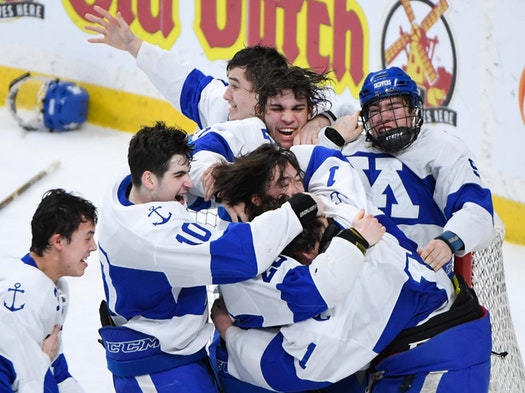 Sticks and gloves flew as Minnetonka celebrated its 5-2 victory over Duluth East in the Class 2A championship game at the Xcel Energy Center on Saturday night. Star Tribune photo by AARON LAVINSKY

Bad bounces and missed opportunities of Minnetonka’s hockey past disappeared from memory Saturday as the Skippers joined the pantheon of state champions.

Five failed tournament runs, from a title game loss in 2010 to a third-place finish in 1990, kept them on the cusp of greatness. But they charted a championship course under first-year head coach Sean Goldsworthy, a school alumnus and captain of that third-place team.

Matching the Greyhounds’ hustle and physical play all night, top-ranked Minnetonka bore down and created opportunities at every turn in a 5-2 victory. An announced crowd of 18,914 watched at the Xcel Energy Center in St. Paul as the Skippers shed their hard-luck past for an ultimate triumph.

“With this group, stuff like that seem to happen to us,” said senior forward Joe Molenaar. “We’re always working and good things happen to teams where everyone is on the same page.”

That wasn’t the situation in January, when Duluth East won 4-2 at Minnetonka (27-2-2). The setback served first as a good lesson and later as motivation for a rematch.

“We felt like that was one of the times this year that we really got outworked,” Molenaar said. “We went into this game high-energy and the bounces went our way.”

Molenaar completed the most pivotal sequence. Trailing 3-2 to begin the third period, Duluth East couldn’t convert with 1:27 remaining on its power play.

Then Molenaar deflected the puck into the net with his left skate, triggering a video review. Officials upheld the goal and Minnetonka led 4-2.

“When that one went in, you kind of question whether it’s going to be your night or not,” Duluth East coach Mike Randolph said.

Randolph, hoping to lead No. 3 seed Duluth East (25-3-3) to its first state championship since 1998, had reason to doubt early on.

Duluth East went a crippling 0-for-6 on the power play while Minnetonka scored twice on three chances.

“We get a power play, we like to step on people's throats and score,” said Goldsworthy, who devoted a chunk of practice three days a week to special teams. “Next year when we’re spending an extra 30 minutes on it and the kids want to go home, we’ll just remind them why it’s important.”

Minnetonka, considered an elite puck-handling and passing team, clinched its victory with one more skill-meets-luck sequence.

Defenseman Grant Docter, behind his the goal line, turned and fired the puck toward Matt Koethe near the red line. Koethe gloved the puck, tossed it to the ice and fired into the open Greyhounds' goal.

Releasing the past from its grip, Minnetonka could grab its first championship with both hands.

“It’s pretty special,” senior forward Luke Loheit said. “I love these guys so much and we’ll walk together forever.” 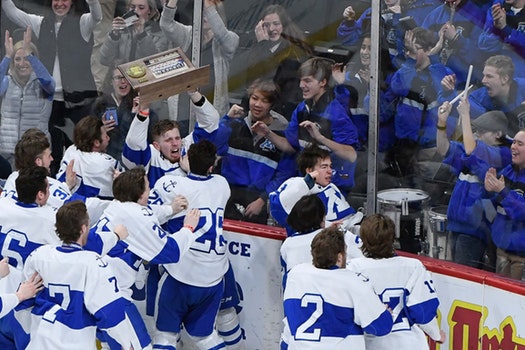 He took a beating as a parade of Greyhounds crashed the net with vigor but seemed only to get better as the physical play ramped up. A sprawling left-leg stop of Duluth East’s Ryder Donovan was the signature save among Glockner’s 29. For good measure, he added an assist on Matt Koethe’s empty net goal.

The Skippers’ top goal scorer was the beneficiary of a favorable bounce in the third period, when Grant Docter’s point shot caromed off his skate and into the net. The lone goal of the third period was Molenaar’s 31st of the season and put Minnetonka ahead 4-2. He also had two assists.

The forward known more for his solid two-way play than big-game offensive production assisted on Ricky Lyle’s first-period goal then scored one of his own in the second. 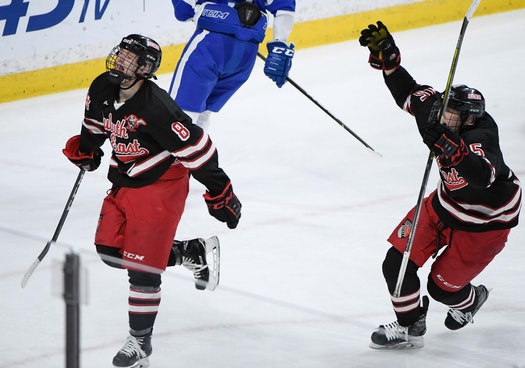 The top-seed Skippers (27-2-2) chartered a championship course under first-year head coach Sean Goldsworthy, a 1990 graduate who took third in the tournament as a senior.

An announced crowd of 18,914 watched Saturday at the Xcel Energy Center in St. Paul as four different Minnetonka players scored. The Skippers weathered the Greyhounds' hustle and physical play.

Trailing 3-2 to begin the third period, Duluth East couldn’t convert with 1:28 remaining on its power play. Then Minnetonka bumped its lead to 4-2 on Joe Molenaar’s goal. He deflected the puck off his left skate, which put the play under video review. Officials upheld the goal at 2:27 of the period.

The Greyhounds got no closer, catching the crossbar flush on one shot. Minnetonka, considered a top passing team in high school hockey, clinched its victory on an incredible sequence.

Defenseman Grant Docter, behind his team’s goal line, turned and fired the puck for senior forward Matt Koethe to catch near the red line. Koethke gloved the puck, then tossed it to the ice and fired into the open Greyhounds goal.

Down 2-1 entering the second period, Duluth East made two goalie-punishing rushes that failed to get results. On the second such play, forward Ryder Donovan crashed over goalie Charlie Glockner like a red and black wave. Glockner finished with 29 saves.

Minnetonka went on its second power play and defenseman Andrew Hicks blasted home his team’s second goal with the man advantage. That gave the Skippers a 3-1 lead.

The Greyhounds’ Austin Jouppi charged the net once more, only this time for a goal to make it 3-2 at 6:28 of the second period.

Duluth East took charge early in an exciting first period, only to see Minnetonka fight its way back in front.

Ricky Lyle, who delivered tone-setting hits early the semifinals, made his presence felt on the score sheet. He buried a great second-effort pass from Jouppi for a 1-0 lead.

The Greyhounds did not take a penalty against Edina but paid for putting Minnetonka on the power play. Hiccup-quick sophomore Bobby Brink drew the tripping penalty then administered the payback with a backhand shot and a goal at 12:06.

But credit Glockner for keeping the Skippers from a 2-0 hole. He stopped golden shorthanded chances by Duluth East’s Donovan.

Just 98 seconds after Brink’s goal, Koethe burst past his man, cut to the net and scored high over goalie Parker Kleive for a 2-1 advantage.

Duluth East won 4-2 in the teams’ previous meeting on Jan. 6 at Minnetonka. But that was a different game. Greyhounds goaltender Parker Kleive had the night off. Luedtke was injured. Both played Saturday.