Duluth East, Minnetonka get the physical game they expected

Minnetonka had an answer for the “Northern” brand of play. 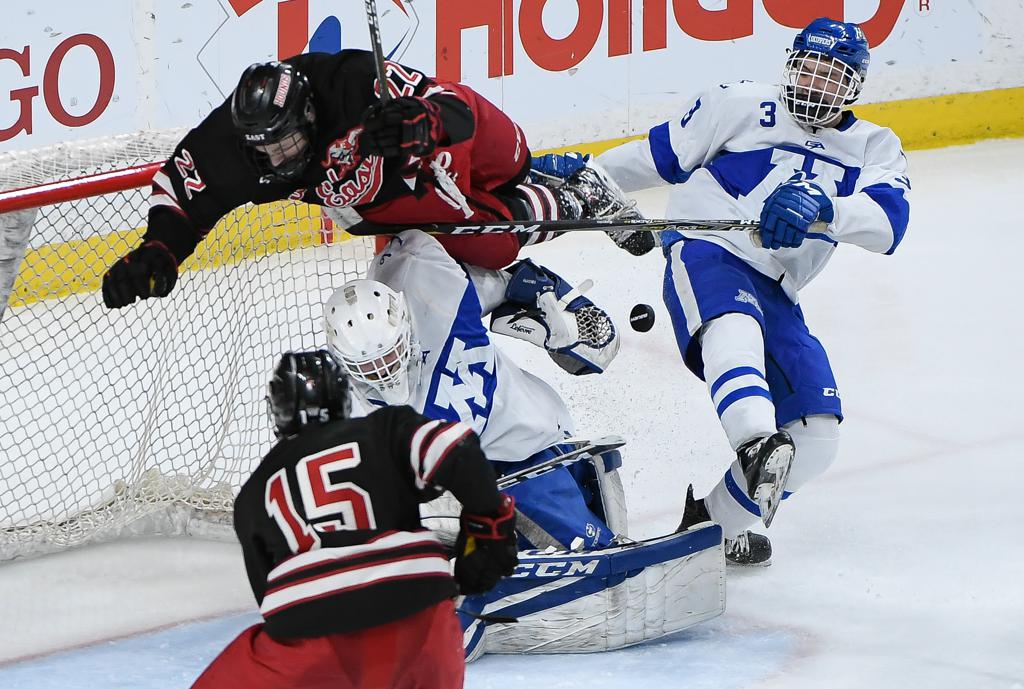 The hits came slowly at first. A bump in the corner. A shove in front of the net. A rub-out in the neutral zone.

The “heavy game” players and coaches from both Minnetonka and Duluth East were expecting in Saturday night’s Class 2A state championship matchup didn’t arrive until the second period, finally announcing itself with a series of crashes, bangs and thuds.

From there, the physical play never relented in Minnetonka’s eventual 5-2 victory over the Greyhounds at Xcel Energy Center.

The fireworks began early in the second period. Duluth East’s Ian Mageau drove the net and got a roughing-the-goaltender penalty for his part in the collision with Charlie Glockner. Minnetonka’s Luke Loheit took offense and was called for roughing.

Minutes later, Duluth East’s Ryder Donovan was cartwheeling over Glockner on a bull rush through the crease. Donovan was called for goaltender interference, too.

“When you play those northern teams, you know they are going to come down, especially with metro teams, and try to set the tone with you,” Loheit said. “So I think it was a big thing, not only with me but with the team, to kind of set that physical tone with them.”

The hits were still coming late in the third. Minnetonka’s Joe Molenaar was slammed into the boards and went down in obvious pain.

“I really couldn’t feel the left side of my face for a good amount of time,” he said.

A night after zero penalties were called in Duluth East’s 4-2 semifinal victory over Edina, seven were called in the second period alone — and 11 in all in the title game.

“I watched Minnetonka play Edina at Christmas-time,” Duluth East coach Mike Randolph said before Saturday’s game. “It was like a no-check game. I went, ‘That ain’t going to happen when we play.’ ”

Duluth East bullied its way to 4-2 victory over the Skippers a week later. Minnetonka was determined to avoid a similar outcome in the rematch.

“Us as a group, we are really up to any challenge,” Molenaar said. “If a team wants to come out and play a physical game, we’ll play it right back.”