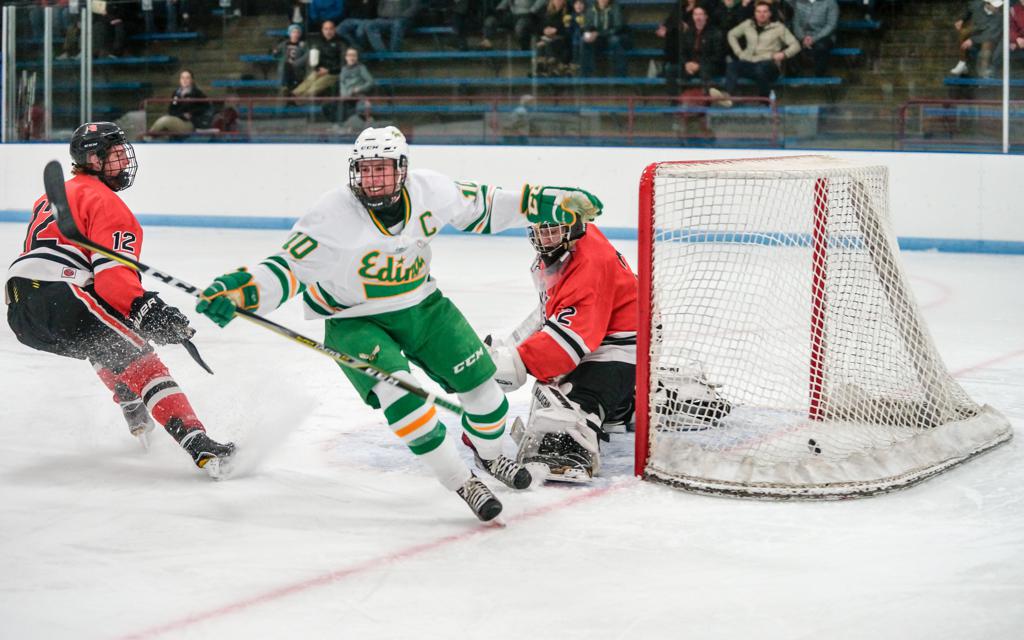 Edina forward Sammy Walker, scoring in the Class 2A, Section 6 semifinal against St. Louis Park, led the Hornets to third place at the state tournament. Photo by Korey McDermott, SportsEngine

The tradition-rich Edina boys’ hockey program has checked all the important boxes but one. That changed Sunday when senior forward Sammy Walker became the first Hornets skater chosen as Mr. Hockey. The 34th annual award was presented at the St. Paul RiverCentre.

“There have been a lot of great players that have gone through Edina and been finalists for this, so to be the first to win is crazy,” Walker said. “I’m humbled and honored.”

Previously named the Star Tribune Metro Player of the Year, Walker was the Hornets’ catalyst this season. His great speed, playmaking and competitiveness produced 35 goals and 44 assists.

Walker played four years on Edina’s varsity, a rare early start in a competitive program. But then, he performs beyond his years both on and off the ice

“I don’t think you’ll find a kid as loved by his teammates as Sammy is,” Edina coach Curt Giles said. “He’s as good to the guys on the top line with him as he is to the fourth-liners or the guys who come up from JV.

“Especially at this age, there’s a tendency to be focused on yourself a little bit. And here’s a kid who is well aware of his surroundings and the people around him. That’s special.”

Walker, a Hornets captain, credited the players in the locker room for making his job easy.

“It helps having the good group of guys that we have on our team,” said Walker, who led the Hornets to third place at the Class 2A state tournament. “When I was a freshman, the seniors were good to me and so I tried to be that for this group of guys.”

Both awards are presented annually by the Minnesota Minute Men, a group that also recognized Lou Nanne with the inaugural Mr. Hockey Ambassador Award. The award given to an influential leader dedicated to the growth and development of hockey in Minnesota.