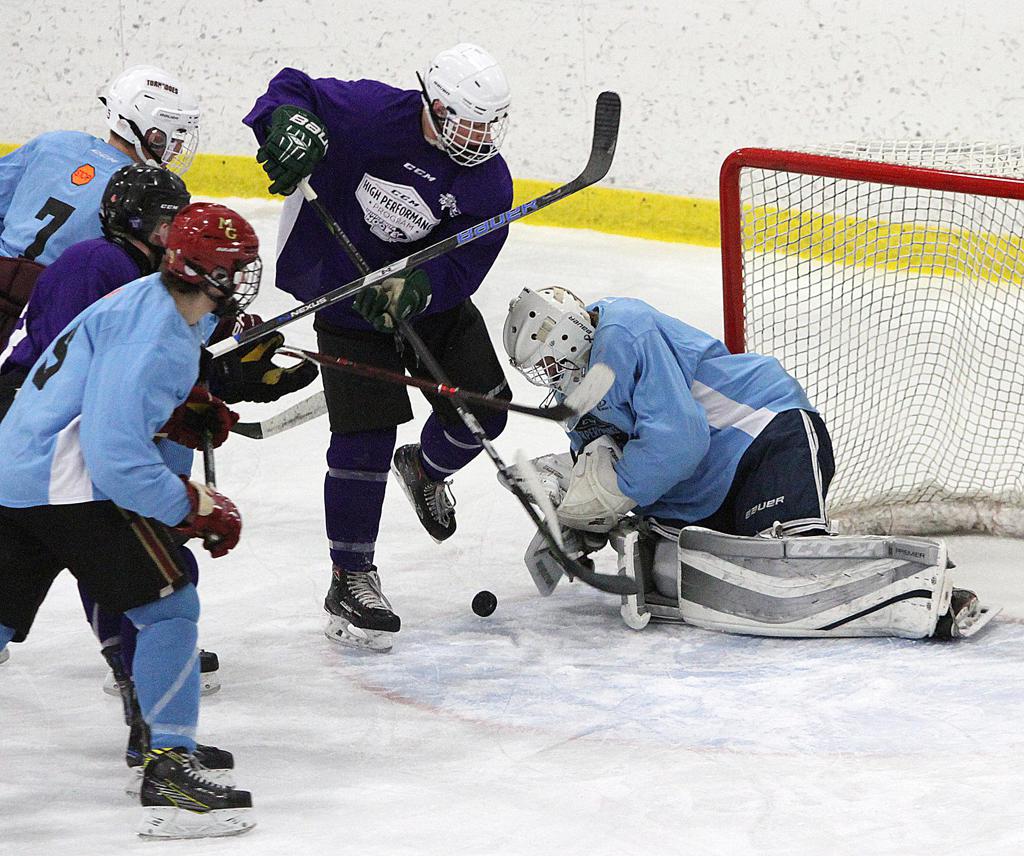 Forward Hanson O'Leary (Roseau) finished with a goal and an assist to lead the way for the northern juniors, who outshot their opponents 30-19 for the game.

Riley Andres (Brainerd) scored the first half's only goal before the Purple squad opened things up in the second. O'Leary's goal (assisted by Frederick Paine from Duluth East) came less than four minutes into the second half, and was followed by a goal from Jonathan Baker (Cloquet) less than half a minute later. Gavin Rasmussen (Cloquet) and Joe Foss (Elk River) assisted on the third goal.

Purple added to its lead when Kyler Kleven (Moorhead) recorded his fourth goal of the tournament with 6:30 to go, effectively sealing the victory for Purple that moves their record to 2-0.  Light Blue drops to 0-2.

Combining for the win between the pipes for the Purple team was Nathaniel Johnston (Rogers) and Lukas Hanson (Duluth East). Johnston finished with five saves on five shots, while Hanson stopped 13 of 14.

At the other end, Brennan Boynton (Champlin Park) stopped 14 of 15 shots in the first half, before giving way to Joseph Daininger (Blaine) in the second. Daininger recorded 12 saves on 15 shots.

Five different players scored and 12 recorded a point as the Gold northern seniors squad survived a fight with White (Seniors 4/5)  to escape with a 5-4 victory.

Max Marvin (Warroad) collected a goal and an assist, and Brad Admundson (St. Cloud) added a pair of assists to lead the Gold Squad to the win that settles its record at 1-1.

Nick Bowlin (Tartan) finished with two points for the White squad, scoring a goal and an assist. White drops its record to 0-2 for the festival.

In goal for Gold, Matthew Fitzgerald (Bemidji) played the first half and made nine saves on 10 shots before Gabe Holum (Grand Rapids) finished out the second with 15 saves on 18 shots.

Their counterparts combined for 30 saves on the night, each making 15 as Travis Allen (Centennial) worked the first half, allowing three goals, while Max Ellefson (Irondale) let in two scores.

Maddux Hagy (Sartell) began the scoring with 11:03 left in the first half, and Green added a second goal by Brydges with 5:41 left before the break. In the second half, Green scored four goals to Gray’s (HP18 1/3) three to pull away.

Gray’s goals came on a penalty shot by Zachary Anderson (Eastview), and a Paul Holbauer (Rochester Lourdes) score with 4:57 left.

In goal., Camden Kreibich (Virginia) started the game for Green and stopped all 14 shots he faced. In the second half, Collin Dorzinski (New Prague) made 11 saves on 13 shots.

At the other end, Thomas Ogren (East Ridge) made 15 saves on 17 first half shots, before Jacob Gathje (Rochester Mayo) played the second half. Gathje made 14 saves on 17 shots.

Blue used an aggressive forecheck to keep a lid on the opposition's chances in the second half, as Red struggled to break out of its zone under the steady pressure.

Red got on the board first when Dylan Svoboda (Austin) opened things up with a goal 5:19 into action. Parker Jamison (Apple Valley) would get the assist on the goal, but the Red team would soon grow silent.

About two minutes later, Blue would level the score on a goal by Matt Koethe (Minnetonka), assisted by Justin Daly (Delano), as the sides skated into the break tied at 1.

Drummer's goal would be the only score of the second half as each side's goalie helped keep a lid on things. Jackson Hjelle (Delano) played the whole game for Blue, making 18 saves on 19 shots. At the other end, Jackson Killinger (Rochester Century) stopped nine of 10 shots in the first half, and Jack Cusey (Mankato East) finished the game 18 saves on 19 shots.