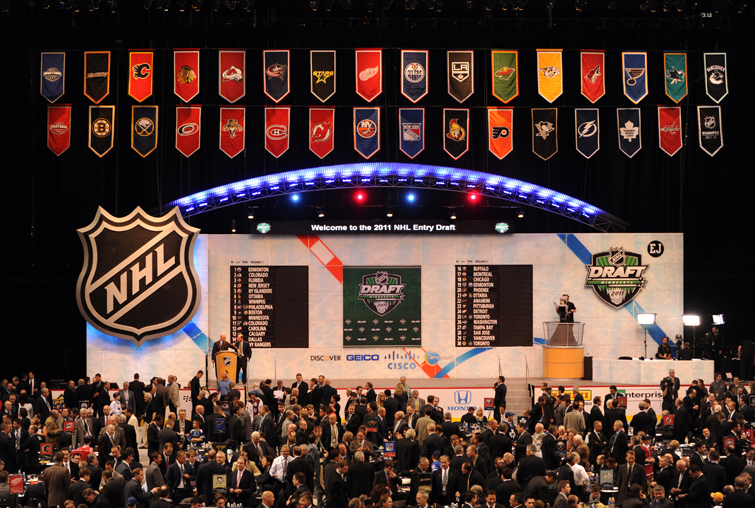 The NHL Draft returned to Minnesota for the first time in 22 years when the first round was held at the Xcel Energy Center in St. Paul. Photo by Helen Nelson

Twenty-five years ago, a first-round shutout of Minnesotans wouldn’t have created a ripple on the international – or even state – hockey scene.

Expectations changed with an explosion of 22 Minnesota-born first round picks from 2000-10.

When the first round came to a conclusion on Friday, June 24, websites and social networks were quick to eulogize “the end of the streak.”

“All of us have been celebrating the fact that the last decade has seen a resurgence of high school hockey in the state,” Benilde-St. Margaret’s coach Ken Pauly said. “The draft picks prove it, all the numbers prove it, and the one year that we do have a little blip, it’s here (at the Xcel Energy Center in St. Paul) and we don’t have a first rounder.”

Wayzata’s Mario Lucia and Seth Ambroz, who grew up in New Prague, were considered the top Minnesota-born prospects. Both are expected to go early in Saturday’s second round. Other potential second-round picks include Joseph LaBate, who played last season at Holy Angels, and former Duluth East standout Andy Welinski.

“This year I don’t think we have the high, high end guy,” said Florida Panthers scout Fred Bandel, a Minnesota-based NHL scout who is entering his 20th season. “But there’s decent depth. And I think the same will hold true next year.”

Bandel said there was a time when only about half of the NHL’s teams employed full-time Minnesota-based scouts. Now about two-thirds of NHL franchises have scouts working full-time in Minnesota, Bandel said.

“Put it like this,” Bandel said, “it’s a league that has to be heavily watched.”

Two years ago, the Minnesota Wild selected Eden Prairie defenseman and Mr. Hockey Nick Leddy in the first round. Leddy, after a playing one season at the University of Minnesota, was a regular in the Blackhawks’ lineup last season after being traded.

“To be two years out … no one would have ever though a high school kid could play one year of college and go on to the NHL without playing any junior,” Eden Prairie coach Lee Smith said. “And he just proved that it’s possible.

“It comes down to fundamentals, to being able to skate and stickhandle and think. If you can do those things, you can play for a long time.”

Blaine’s Nick Bjugstad, Mr. Hockey in 2010, was a first-round pick by the Florida Panthers at last year’s draft. He’s peparing to play his second season at the University of Minnesota.

“When you get a kid like Nick Bjugstad, who we drafted in the first round last year, well, he’s as good as anyone,” Bandel said. “Maybe he’s not (2010 first overall pick) Taylor Hall right now, but down the line he very well could be.”

Bjugstad watched Friday’s first round from Florida’s suite at the Xcel.

“It’s nerve wracking just waiting there,” he said about the draft experience. “It’s exciting at the same time. It’s a great experience. I loved every second of it.”

Turns out, it came to Minnesota a year late.

“This is a great environment, obviously, the Xcel,” Bjugstad said. “It’s like nothing else. It was fun to travel to Los Angeles but I think I would rather go with (being drafted) here, if I had to choose.”