Wayzata star Mario Lucia didn't get his wish of being drafted in the first round, but the Wild gave him a great memory by dealing to take him in the second. 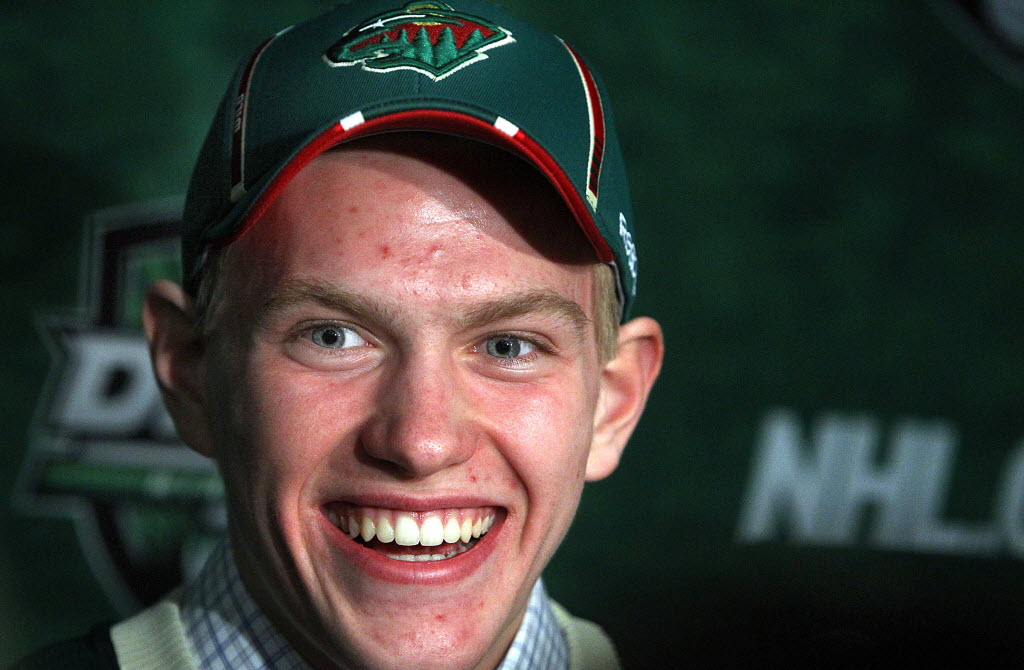 Second round Wild draft pick Mario Lucia, left winger from Wayzata and son of Gopher hockey coach Don Lucia, greeted members of the media during a interview session after he was drafted.

Mario Lucia started listening for his name Saturday as soon as a Wild trade was announced.

Lucia never heard his name on the P.A. system – just the words "from Wayzata High School." Loud cheers at Xcel Energy Center drowned out everything else on the second day of the NHL draft.

The Wild took Lucia, the son of Gophers men's hockey coach Don Lucia, with the second-to-last pick of the second round, No. 60 overall.

"You could not have written a better story than this: Growing up in Minnesota, being drafted by the hometown team," Mario Lucia said, "and then finally having the draft here."

The Wild, without a second-round pick, traded their third- and fourth-round picks, Nos. 71 and 101, to Vancouver to draft Lucia.

As the crowd applauded – Mario was the first Minnesotan taken – Don Lucia turned to his son in their row of seats. "He said, 'Congrats,' and he had tears in his eyes," Mario said. "It was a good moment for me and my family."

Lucia, a 6-2, 187-pound left winger, averaged two points per game as a junior last season. He scored 30 goals and had 24 assists for 54 points for the Trojans.

"It was a lot more stressful than the first round," Lucia said of Saturday morning's wait.

Lucia was hoping to be taken in the first round on Friday, expecting to go early in the second round. He was rated No. 34 among North American skaters by the NHL's Central Scouting.

"I just wanted it to be over with," Lucia said. "It has been a long, stressful process. I am just happy to have it be done."

He was interviewed by 21 teams at the NHL combine in Toronto last month. More meetings with teams followed, including one in mid-June with the Wild.

"They said they were going to try to get me," Lucia said. "Once that deal [with Vancouver] went down, I had high hopes and they met them."

The Wild is intrigued by Lucia's potential.

"Physically, [Lucia] has a ways to go, but he is a big kid and he has skill," said Brent Flahr, the Wild's assistant general manager. "He was the top kid from Minnesota on our list, and he fell far enough down and we were able to move up."

With persistent effort. Several earlier trade attempts by the Wild were fruitless.

"He could not have gone to a better place," Don Lucia said. "It's a class organization. I know at times the Wild have been unfairly criticized for what they do with Minnesotans.'' In its 11 drafts before this year, the Wild had selected a total of six Minnesotans.

"But this was a good fit with a Minnesota kid in that spot – fortunately for us,'' Don Lucia continued. "It was exciting for me, and Mario was beaming when it happened."

Mario Lucia, who turns 18 in August, is undecided on a team next season and a college. But he is certain the right NHL team drafted him.

"The [Wild's] fans will be behind your back, especially being a hometown guy," Lucia said. "I have a lot of work to do before I get to the NHL, but I hope someday I will get there."

This coming season, Lucia will play for either the Penticton Vees of the British Columbia Hockey League or the Des Moines Buccaneers of the United States Hockey League. He visited Penticton after his school year ended – he loved the facilities and scenery – and participated in the Buccaneers' training camp last weekend.

His college list is down to the Gophers, where his older brother Tony played; Notre Dame, his father's alma mater; and Colorado College, where he lived as a youngster when Don coached the Tigers.

"I will play four years of college if I have to," Lucia said.

The Wild will wait for him to develop wherever he goes.

Minnesotans Selected in the 2011 NHL Draft