The showcase game in St. Paul, reminiscent of a series played about 30 years ago, is expected to help players boost their profiles before pro and college scouts. 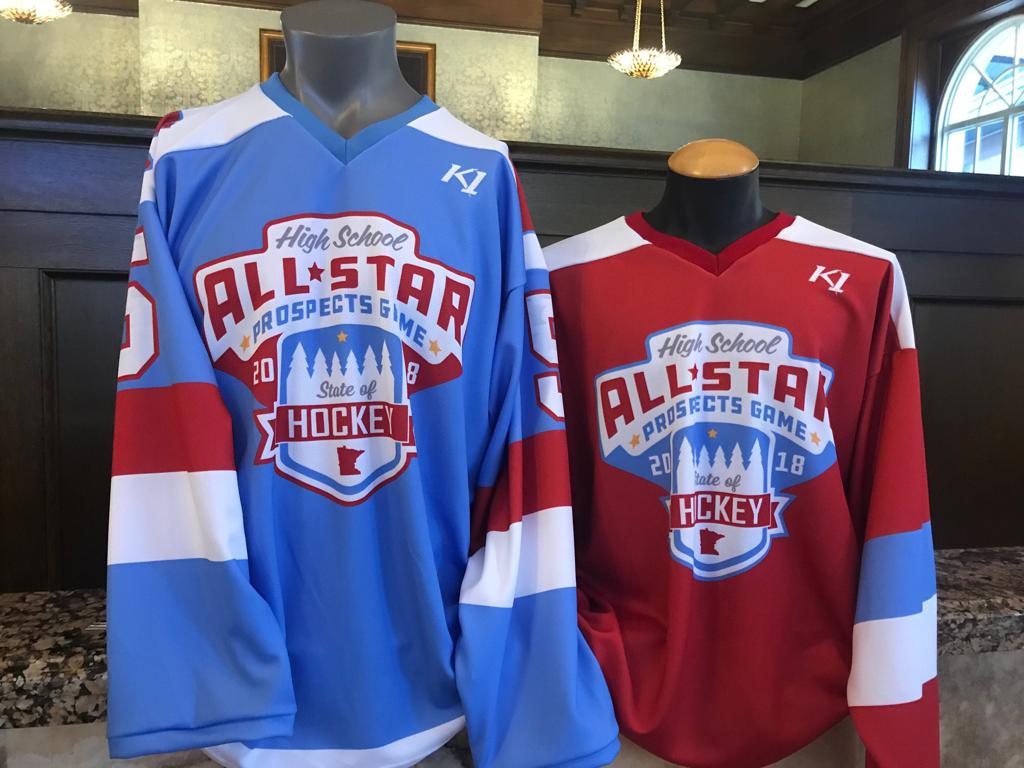 These jerseys will be worn by players participating in the boys' hockey showcase on Saturday in St. Paul. Photo provided by Anne Butters-Anderson, an administrator with State of Hockey.

Call it a hockey celebration, a showcase or a coming-out party. The inaugural Minnesota High School All Star Prospects Game aims to be all three.

Beginning at 2:30 p.m. Saturday, about 48 hours before the 2018-19 boys’ hockey season commences, 40 of the state’s top players hit the TRIA Rink ice in downtown St. Paul. Their audience will include scouts from the National Hockey League as well as the college and junior hockey ranks.

The event, about a year in the making, is reminiscent of the Maroon and Gold All-star series that started in the mid-1980 and ran for about a decade. Reintroducing an all-star event is good for players’ profiles and ensuing the health of high school hockey, said Anne Butters-Anderson, an administrator with State of Hockey, a subsidiary of the Minnesota Wild.

“One parent told me, ‘This is something that needed to happen in this state,’ ” Butters-Anderson said. “The reason behind it, and the mission of State of Hockey, is to work with the various partners to continue to keep the community association hockey model in place and build strong high school programs.”

An official NHL Central Scouting event, the all-star game provides players a wider audience in a local setting. Tickets are $10 for adults. Those age 18 and under get in free. Some tickets remained as of Thursday afternoon.

“It’s a great idea and the timing is great,” Duluth East coach Mike Randolph said. “It’s a way to kick-start high school hockey and showcase what’s to come this winter.”

“I still think these are unbelievable rosters,” said Mike MacMillan, executive director of the Minnesota Hockey Coaches Association. “The players are excited to be recognized.”

A few high-profile names are missing. Only Chaska defenseman Mike Koster, one of six Minnesota high school players listed as B or C-level skaters on the NHL Central Scouting preliminary players to watch list in October, is playing. An injury sidelined Duluth East forward and B-rated skater Ryder Donovan.

“These are the kids willing and able to participate,” said Jon Ammerman, Moorhead coach and coaches association president. “At least it’s a starting point, a showcase of what we have in terms of the best players in the state. We want to make sure we’re staying relevant and ahead of the curve and this game is a good opportunity for us to do so.”

Moorhead senior forward Kyler Kleven, who is not committed to a college program, will skate for Team Red. Ammerman held him up as a player who can benefit from the opportunity.

“Maybe he wasn’t mentioned as a junior last season as much as he should have been,” Ammerman said. “But he just had a great Elite League season so this game is a great opportunity for him as a coming-out party.”