Minnetonka throttles St. Thomas Academy in nightcap at The Opener

The Skippers opened their season and began their Class 2A title defense surrendering just one goal to the Cadets. 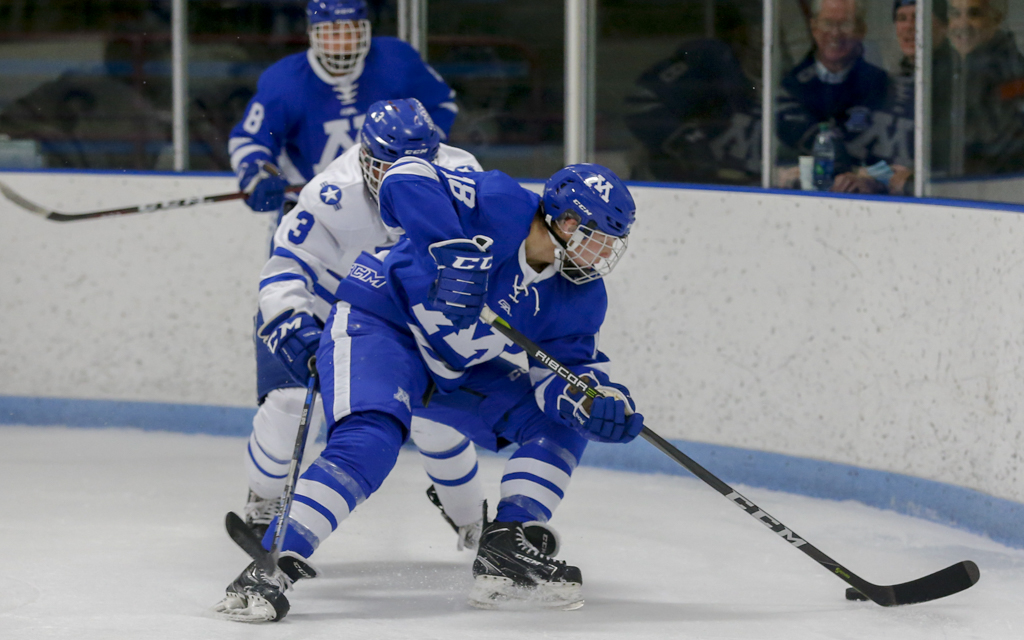 Minnetonka junior Mack Motzko tries to find space behind the St. Thomas Academy net. Motzko had a goal for the Skippers in their 4-1 victory over the Cadets. Photo by Jeff Lawler, SportsEngine 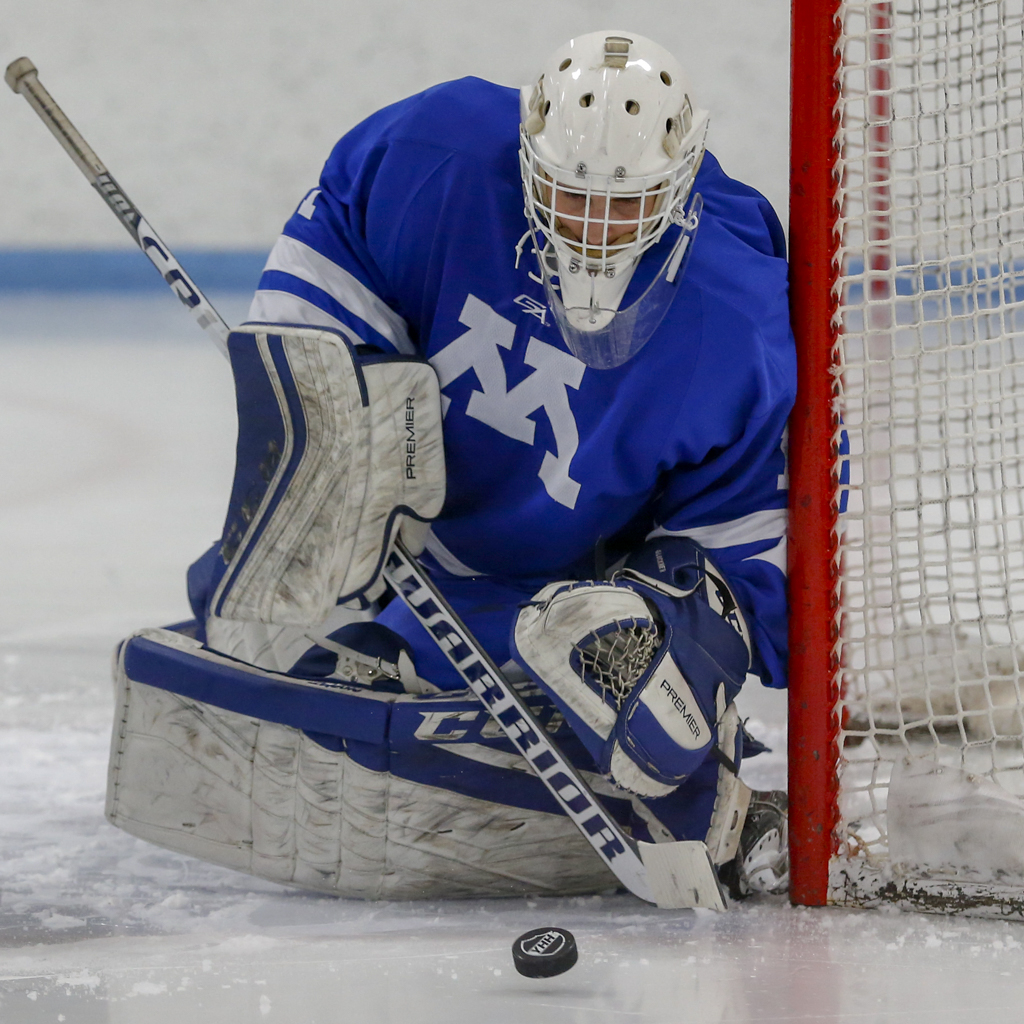 Minnetonka's Charlie Glockner shuts down the short side on a St. Thomas Academy shot Friday night. The Skippers opened the season with a 4-1 victory over the Cadets. Photo by Jeff Lawler, SportsEngine

The front of the sweater still says "M" for Minnetonka, but this is not the same team that won last year's Class 2A boys’ hockey state title and the Skippers know that.

Despite the roster shuffling from one season to the next, the result Friday in Minnetonka's season opener against St. Thomas Academy was similar to last year: an impressive 4-1 victory the first day of The Opener at the Bloomington Ice Garden.

Minnetonka coach Sean Goldsworthy stated his team can improve as the season progresses.

"These guys are still looking around and trying to figure out who their teammates are," he said. "I don't think we had one single line that had played together -- ever. A lot of these kids are brand-new, and some of them are new to our program."

Instead of seeing that as a negative, Goldsworthy views that "newness" as a positive.

"That's what is fun about high school hockey: You turn over your roster pretty quick," he said. "That keeps everything fresh and exciting.

"And even the returning kids have new roles. For example, last year Mason Hendrickson was kind of a fourth-line guy that we spotted in. Now he's taking regular shifts and is on our special teams. But it's his senior year. It's his time."

Skippers senior forward Jack Bayless, a UMass-Lowell commit, said he and his teammates have embraced the challenge of defending their state title with a number of newcomers.

"Going into this year we knew we would have a target on our back," he said. "We know we will get every team's 'A' game; no one is going to take their foot off the gas because we're the defending champs.

"We prepared for that all summer, and we've got a good group of guys. We're ready to take on that challenge.”

Minnetonka, ranked No. 1 in the Class 2A preseason coaches’ poll, led 2-0 after the first period, outshooting the Cadets 16-1 while creating a number of scoring chances with a relentless forecheck that bottled No. 5-2A St. Thomas Academy deep in its own defensive end for much of the period.

"We like to put the pressure on right away by cutting their D off in their own zone," Bayless said. "We work on that every day in practice: putting pressure on them and pinning them down low."

Mack Motzko got the Skippers (1-0) on the board with a goal at 9:17, and Braedon Lacomy found the back of the net with just 17.9 seconds left in the opening period.

"We're trying to play fast and create an environment where the kids aren't afraid to make a mistake," Goldsworthy said. "Whatever we're doing, we want to do it fast. We don't want to stand still."

St. Thomas Academy (0-1) got on the board when Will Soderling scored at 6:53 of the second period, but Minnetonka re-established its two-goal lead when Jack Bayless found the back of the net at the 12:18 mark.

That play was set up by a nifty pass by Josh Luedtke from the far-left boards to a wide-open Bayless to the right of Cadets goalkeeper Muzzy Donohue.

The Skippers also dominated the third period, outshooting St. Thomas Academy 13-2, and claiming the only goal when Hendrickson forced a turnover and found Griffin Streeter alone in front of the net at 10:28.

"They just keep coming and coming," Cadets coach Greg Vannelli said of Minnetonka. "That's a tough first game for us to have, but it does show us what we need to work on.

"If it's going to happen this way, there's no better game than the first game for this to happen."

While unhappy to lose, Vannelli said it will help his team improve when four players on the St. Thomas Academy football team return to the lineup after playing in the Class 5A Prep Bowl game Saturday.

"That's going to add some depth to our top two lines," Vannelli said. "But this game was more about Minnetonka's skill level than about things we did wrong."

Donohue kept the Cadets in the contest by making 40 saves, while Charlie Glockner stopped nine shots for the Skippers.

In the second day of The Opener, on Saturday, St. Thomas will face Cloquet-Esko-Carlton at 2 p.m., while Minnetonka will face off against Lakeville North at 7 p.m.

Defending Class 2A state champion Minnetonka put together an impressive performance in beating St. Thomas Academy 4-1 in the second game of The Opener Friday at the Bloomington Ice Garden.

The Skippers, ranked No. 1 in the Class 2A preseason coaches’ poll, outshot the Cadets 44-10 in the contest to win the season opener for both schools.

Minnetonka led 2-0 after the first period, outshooting the Cadets 16-1 and scoring even-strength goals by Mack Motzko and Braedon Lacomy.

St. Thomas Academy got on the board when Will Soderling scored at 6:53 of the second period, but Minnetonka re-established its two-goal lead when Jack Bayless found the back of the net at the 12:18 mark.

The Skippers (1-0) outshot No. 5-2A St. Thomas Academy 13-2 in the third period and finished off the win with a goal by Griffin Streeter.

Cadets goaltender Muzzy Donohue kept his team in the contest by making 40 saves, while Charlie Glockner stopped nine shots for the Skippers.

St. Thomas Academy (0-1) will face Cloquet-Esko-Carlton Saturday at 2 p.m., while Minnetonka will face off against Lakeville North at 7 p.m., with both contests at BIG to conclude The Opener. 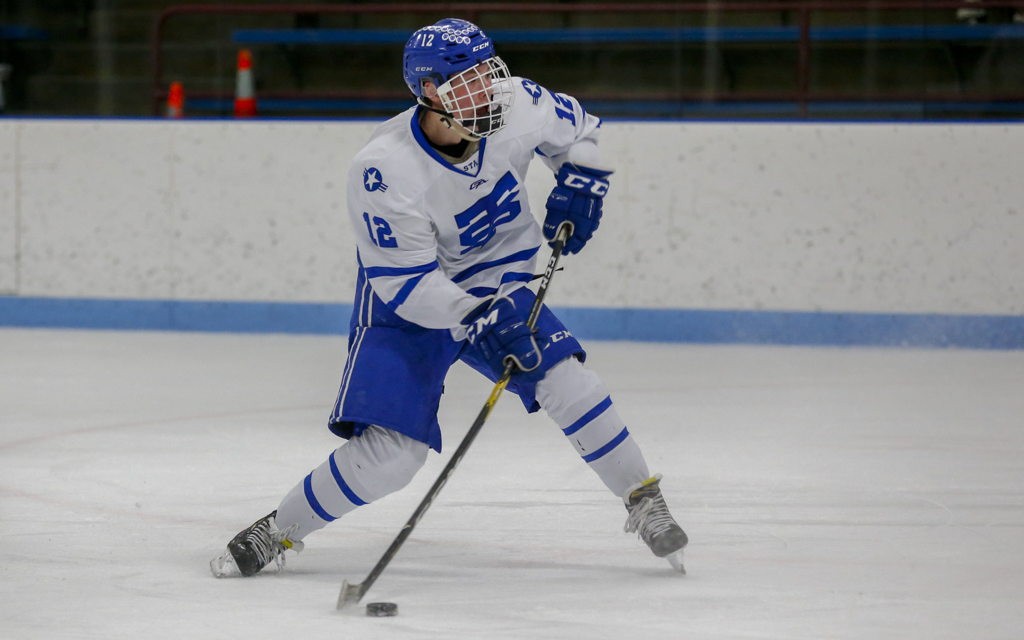 St. Thomas Academy's Ryan O'Neill fires a shot on net against Minnetonka. The Cadets fell to the Skippers 4-1 in the season opener for both teams. Photo by Jeff Lawler, SportsEngine