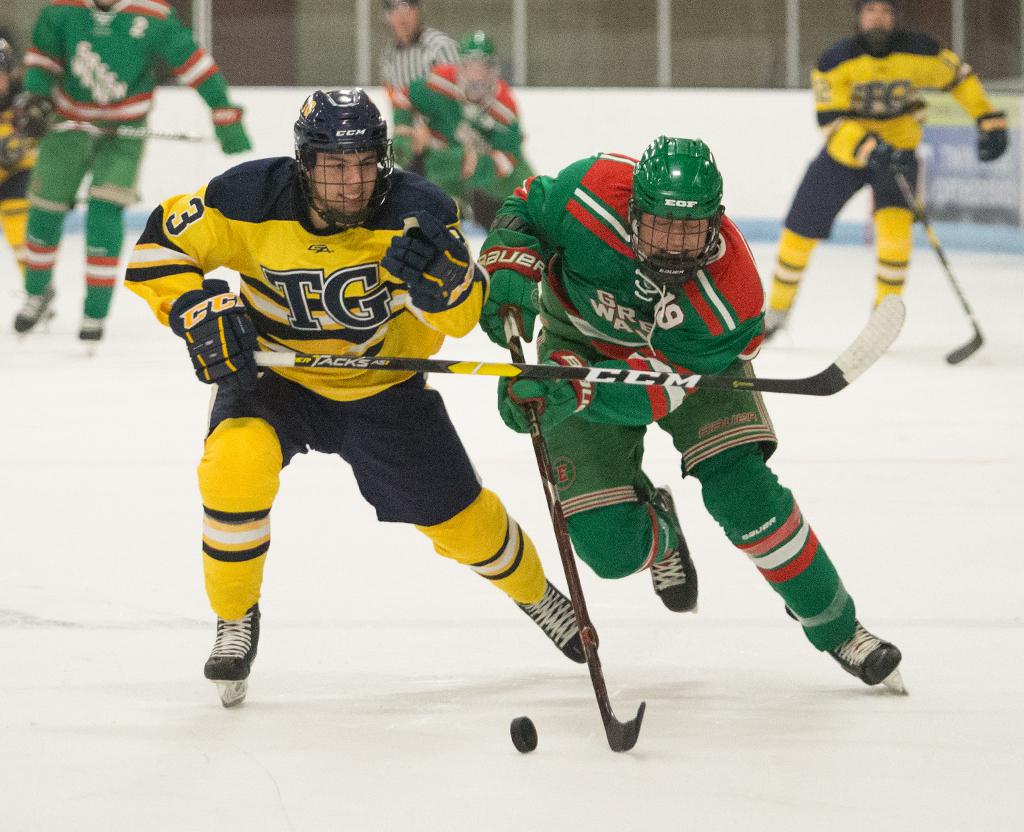 Adam Johnson (3) and Tanner Mack (19) race to the puck crossing the blue line. Mack opened up the second period with three goals in under five minutes helping the Green Wave cruise to a 7-2 win over the Eagles. Photo by Cheryl Myers, SportsEngine 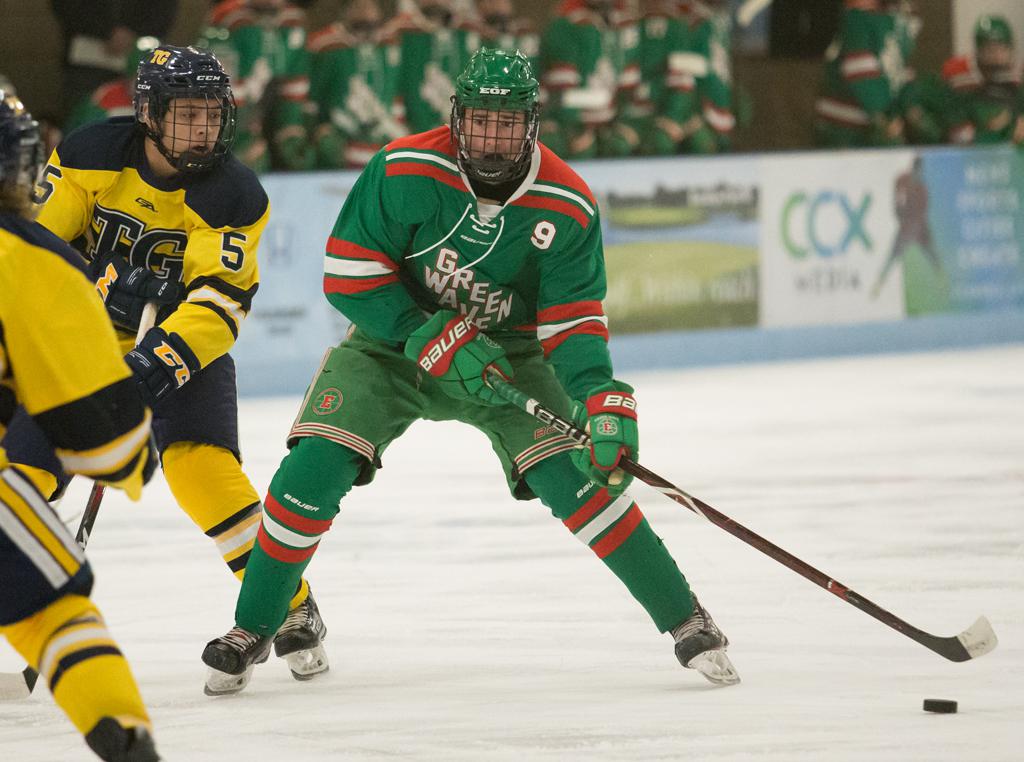 Sophomore forward Landon Parker (9) looks for an opening in the lane. Parker scored first for East Grand Forks in a 7-2 win over Totino Grace on Friday night. Photo by Cheryl Myers, SportsEngine

Tanner Mack had never recorded a hat trick before. Not in high school, anyways.

When Mack charged into the second period Friday night at Brooklyn Park Activity Center and pounded home three goals in less than 5 minutes with machine-like tact, the senior forward made it look routine.

Mack’s three tallies, strung together in succession early in the middle period, assembled the purest of hat tricks, and placed East Grand Forks on sound footing en route to an eventual 7-2 thrashing of Totino-Grace. 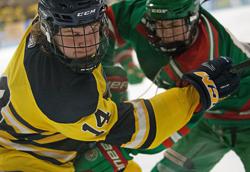 “We weren’t happy with the way the first period went, and we were committed to change things,” Mack said. “We did that by getting pucks to the net.”

Mack finished with three goals and five points to lead the Green Wave, ranked No. 6 in the Class 1A coaches’ poll, to a 4-0 record on the season.

After Totino-Grace built a 2-1 lead with a pair of power-play goals in the first period, East Grand Forks answered with a committed and aggressive forecheck that forced turnovers and fueled the Green Wave offense.

The speed, pressure and physicality began to wear on Totino-Grace (0-2), and East Grand Forks’ effort began to blossom.

“After that first (goal), you could feel things were shifting,” Mack said. “We were confident in what we were doing. It was important to get pucks to the net, but to also be patient and to find the right guy.”

East Grand Forks, which came into the contest averaging nearly four goals per game, pounded out a season-high seven goals, with scores coming from five players. The victory signals a strong step forward for a team looking to bank on its depth.

“We want to play the same way, no matter who is on the ice,” Green Wave coach Tyler Palmiscno said. “I think tonight everybody did a good job of competing and playing extremely hard.”

After hanging four goals on the Eagles in the second period, East Grand Forks kept the foot on the gas pedal in the third, adding another two goals while keeping a lid of Totino-Grace’s ability to generate sustained offense in the Green Wave defensive zone. At the other end, zone time set up increasingly fruitful scoring chances as East Grand Forks pounding out 42 shots to Totino-Grace’s 21.

“We came out with some good jump and put the pressure on them,” Palmiscno said. “I think we did a good job of capitalizing and making plays when we were around the net.”

Tanner Mack poured in three goals in a span of less than five minutes in the second period Friday night to ignite East Grand Forks past host Totino-Grace 7-2 at Brooklyn Park Activity Center.

Trailing by a goal after the first period, the Green Wave went to work with an aggressive forecheck immediately in the second to set the tone the rest of the way. East Grand Forks, ranked No. 6 in the Class 1A coaches’ association poll, used its speed and physicality to wear down Totino-Grace, leading to the Green Wave outshooting the Eagles 42-21.

Mack finished with five points for the Green Wave (4-0).

Totino-Grace’s two scores came in the first period when the Eagles (0-2) were able to cash in with the man advantage early. Kyle Heffron scored 8 seconds into a power play at 4:03. The second led to the Eagles briefly reclaiming the lead when Adam Johnson scored on the power play with 25 seconds left in the period.

Tucker Brown manned the crease for Green Wave and settled in to shut out the Eagles over the final two periods. Brown finished with 18 saves. 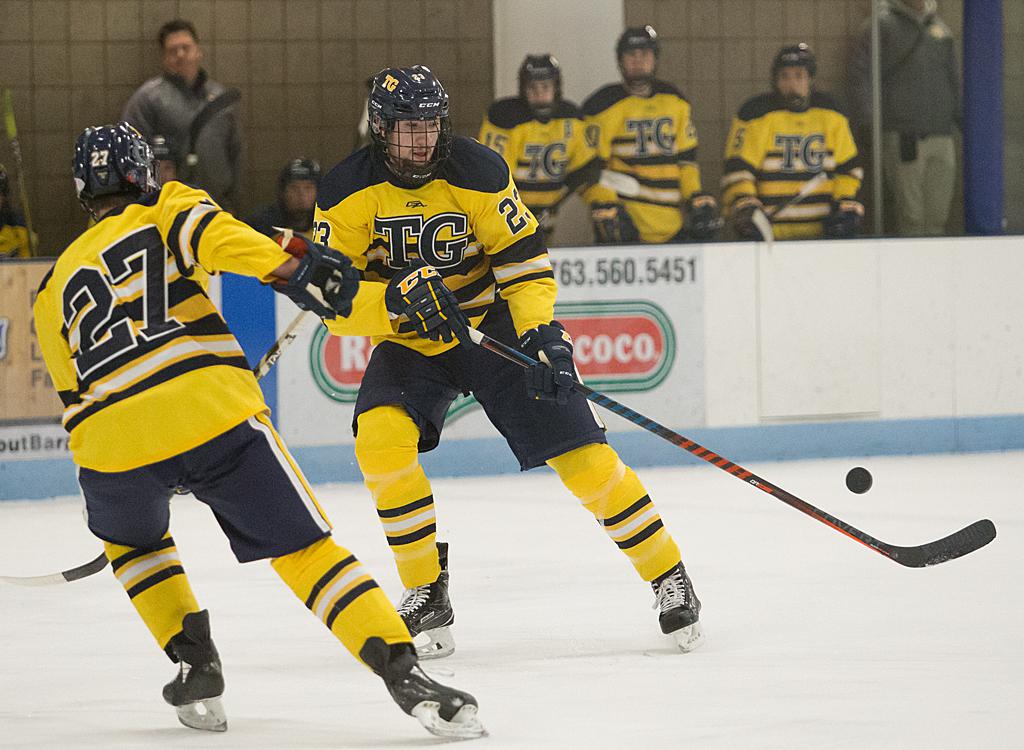