With the win, the Huskies defeated their Class 2A, Section 7 rival and maintained their perfect record. 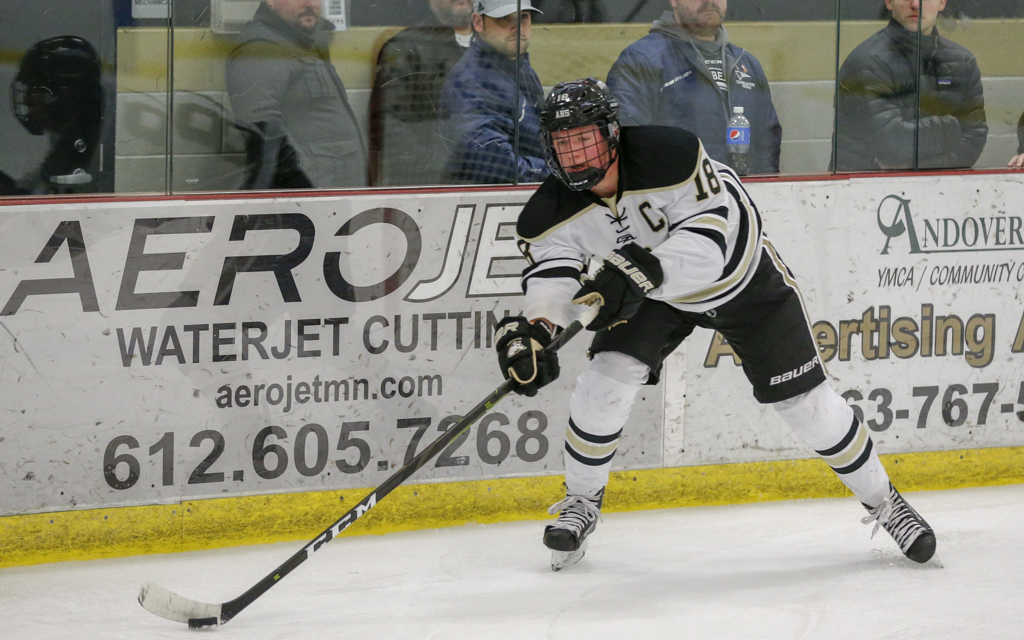 Andover defenseman Dylan Livgard moves the puck from behind his own net Saturday afternoon against Duluth East. Livgard scored the Huskies' first goal in their 2-1 overtime victory over the Greyhounds. Photo by Jeff Lawler, SportsEngine

Move your feet. Move the puck. Show up early and stay late for extra reps after practice.

Young hockey players, take notice. Do all those things, and you might someday find yourself in Luke Kron’s situation. And man, is it a sweet one.

Kron, an Andover junior, received one of the best promotions a player could ever get this fall when he was picked to center the Huskies’ top line. These days he skates between one of state’s best power forwards in 6-foot, 185-pound Nick Dainty and one of the state’s elite puckhandling wizards in 5-7, 145-pound Charlie Schoen.

“It’s so fun playing with them,” Kron said. “I try to go get the puck for them. And just keep moving with them all the time.”

The 5-11, 155-pound Kron was at his feet-blurring best on Saturday afternoon in overtime against Class 2A, Section 7 archrival Duluth East. Kron never broke stride as Dainty skated into the Greyhounds’ zone and took a big hit against the boards. Dainty dished the puck to the speeding Kron just before being crushed, and Kron whipped a shot into the upper right corner of the net, right where the crossbar meets the post.

“(Dainty) made a great play, chipping it up the boards,” Kron said. “Take the hit to make the play. And I just went in and shot. And lucky enough it went in.”

The 2-1 victory at a packed Andover Community Center (capacity 1,000, give or take) was the Huskies’ first over the Greyhounds in the program’s history (16 tries). It gives unbeaten Andover the momentary advantage in a section that appears to be a two-team race to the state tournament.

“It is a big confidence boost because we have never beat Duluth East,” said Andover senior goalie Ben Fritsinger, who made 35 saves. “We have been waiting for months to play them again.”

The difference this time?

“I think we are just getting older and more confident as a team coming together,” he said.

“It was a playoff-type game,” Duluth East coach Mike Randolph said. “For a high school hockey game in early December? That was a hell of game.”

Randolph, who features another of the state’s elite lines in Mr. Hockey candidate Ryder Donovan with Ricky Lyle and Brendan Baker, usually spends much of the regular season gathering information about his players and how they perform in certain combinations and situations. On this day, he gave goaltender Brody Rabold, a senior making his first varsity start, a look.

Rabold delivered with a brilliant 31-save performance that included two breakaway stops on Schoen in overtime. He also robbed Schoen from point-blank range in the third period.

“I told the guys, ‘Win or lose, I don’t care. That will all take care of itself if you play the right way.’ ” Randolph said. “I just wanted us to be competitive with them in their rink. They are not only a top team in our section, they are a top team in the state.”

Kron, who scored an overtime goal against Blaine last year, said overtime against the Huskies was a best-case scenario.

“I love when it goes to overtime,” he said. “It excites me.”

As for the win, well, Kron recognized it is early December. The section playoffs aren’t until mid-to-late February. The state tournament is in March.

“It’s good, this is definitely a confidence builder, but we’re a fifth of the way through the season,” he said.

Junior Luke Kron scored with 44 seconds left in overtime to power Andover to a 2-1 victory over Class 2A, Section 7 rival Duluth East on Saturday afternoon in front of a capacity crowd of about 1,200 at Andover Community Center.

The loss was the first of the season for Duluth East (3-1). Andover, ranked No. 4 in the Class 2A coaches' poll, improved to 5-0. Duluth East beat Andover 3-2 in overtime in last season’s section final.

Andover goaltender Ben Fritsinger finished with 35 saves and was involved in several run-ins in the crease with Duluth East players. Fritsinger was sprawled on the ice after two of the collisions, but each time eventually rose to his feet and soldiered on.

Andover senior captain Dylan Livgard opened the scoring with 59 seconds left in the first period on a low shot from the right point that beat a screened Rabold. Hunter Zinda assisted Livgard’s goal, his first of the season.

Junior forward Charlie Erickson tied it for No. 2-2A Duluth East with 7:35 left in the third. 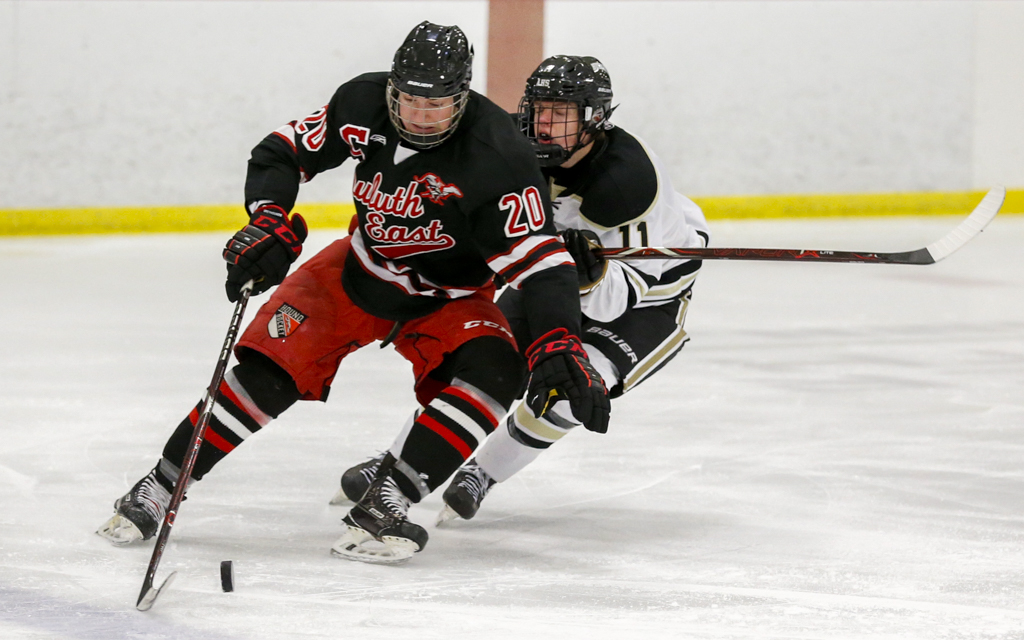 Duluth East senior Frederick Paine battles for control of the puck with Andover's Hunter Jones. The Greyhounds fell to the Huskies 2-1 in overtime Saturday afternoon. Photo by Jeff Lawler, SportsEngine