Junior forward Teddy Lagerback netted a pair of second-period goals, guiding the Skippers past the Crimson. 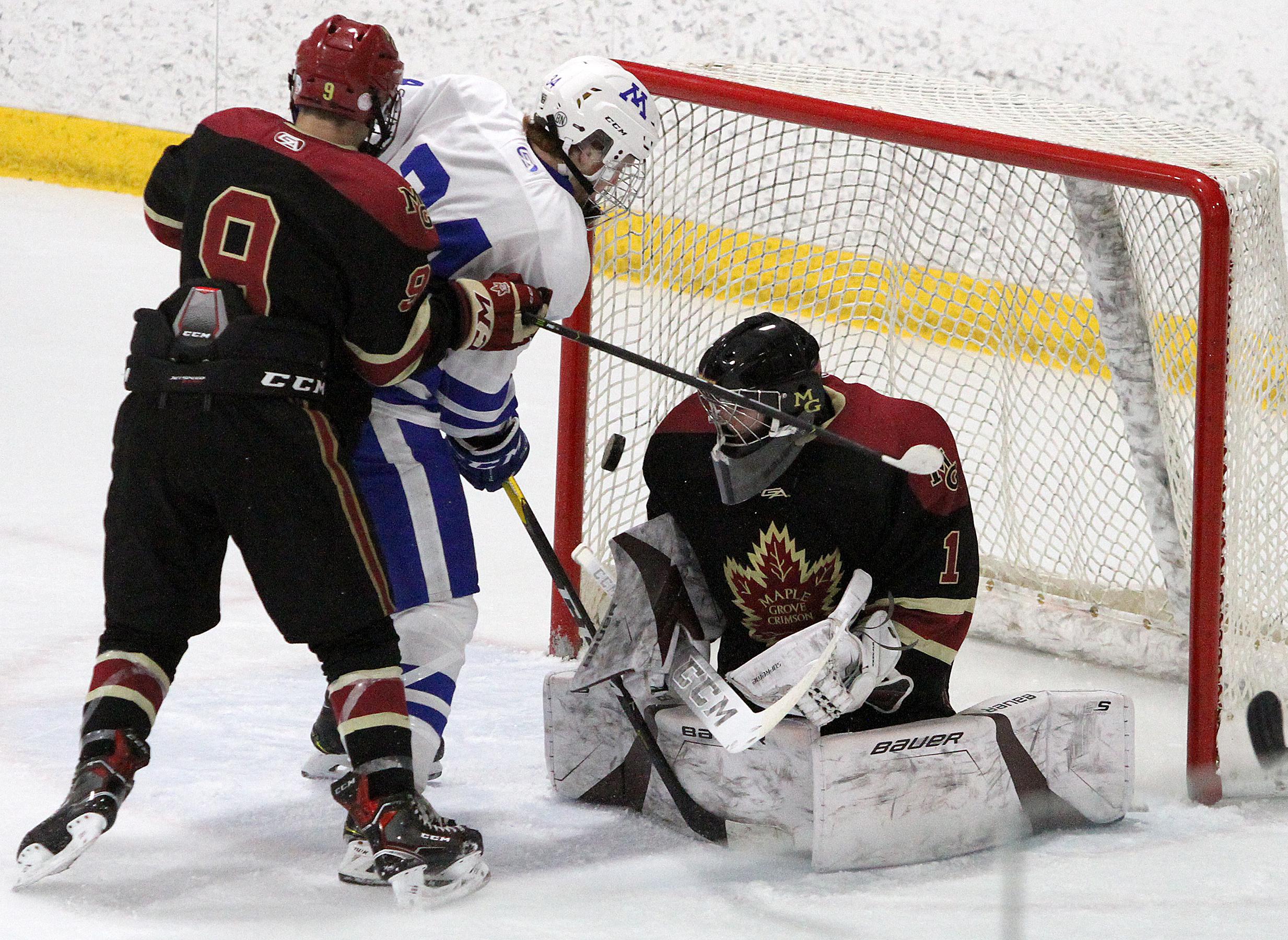 Minnetonka forward Teddy Lagerback battles for the puck in the crease between Maple Grove goalie Jack Wieneke and center Kyle Kukkonen during the third period of Friday night's game at The Tradition in the Park Classic. Photo by Drew Herron, SportsEngine 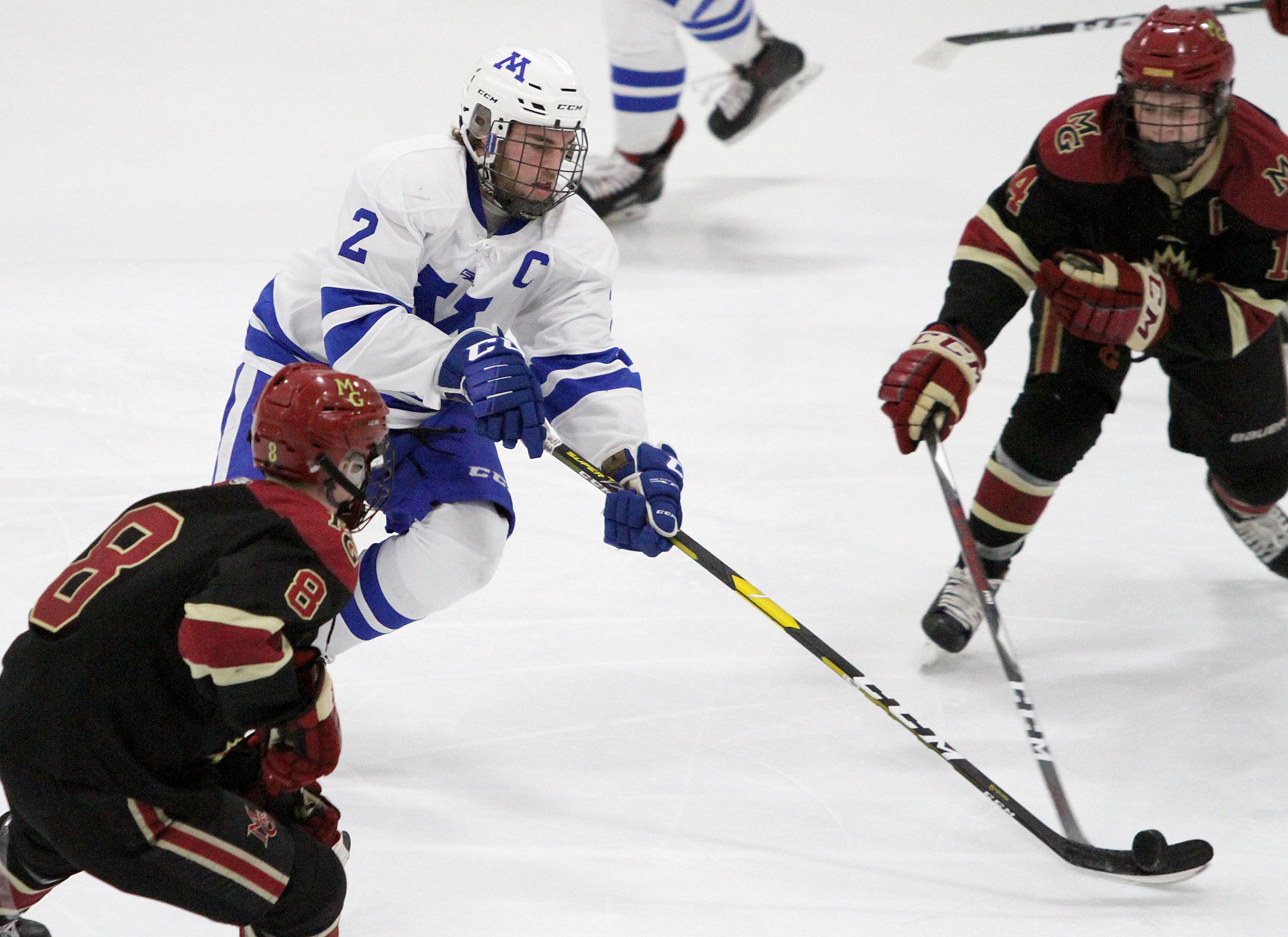 Minnetonka senior captain Grant Docter finished with a goal and an assist in the Skippers' 5-2 win over Maple Grove. Photo by Drew Herron, SportsEngine

Minnetonka junior Teddy Lagerback considers NHL goal-scoring legend Alexander Ovechkin of the Washington Capitals his favorite NHL player. Lagerback even possesses a coveted picture of him standing next to “Alexander the Great,” a photo he’s shared with the world on social media.

Fittingly, Lagerback was wearing a Capitals T-shirt after scoring twice in the Skippers’ 5-2 victory over Maple Grove in a battle of top-five ranked state big schools, both of which entered the Tradition in the Park Holiday Hockey Classic matchup at the St. Louis Park Rec Center unbeaten.

“He’s always hungry to score,” Minnetonka senior goaltender Charlie Glocker said about Lagerback, whose nine goals this season puts him in a tie for the Skippers’ goal-scoring lead with fellow junior Griffin Streeter.

Lagerback scored both his goals during a late second-period flurry in which the Skippers turned a 1-0 lead into a 4-0 bulge heading into the third, improving their season record to 11-0-0 and their win streak over the past two seasons to 24. 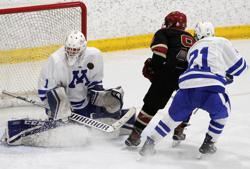 “Teddy’s relentless,” Minnetonka coach Sean Goldsworthy said about the 6-foot, 185-pound winger. “He has a really big hunger to score goals, and he’s strong on the puck.”

Hungry? Yeah, that might be the one word that describes Lagerback the best.

“At the end of practice we always like to do shootouts and stuff," Glockner said. "We give each other grief, but at the end of the day it’s to better each other.

The Skippers dominated play through much of the first period and all of the second, but only had a 1-0 lead to show for their territorial dominance. Then Lagerback lifted his stick waist high just in time to deflect a James Miller shot from the point past Maple Grove goaltender Jack Wieneke.

Less than six minutes later, with Minnetonka leading 3-0, Lagerback whacked at a loose puck in front of Wieneke one, two, maybe three times before finally slamming it into the net. The Skippers led 4-0 heading into the third.

“He’s a handful,” Goldsworthy said about Lagerback, who has committed to play Division I hockey at Arizona State. “When Teddy plays with a pretty good pace, I think he can play with just about anybody.”

“We’ve been switching the lines a little bit,” Lagerback said. “I like playing with everyone. Everyone is good.”

The top-ranked Skippers’ depth proved too much for a Maple Grove team that entered the matchup ranked No. 5 in the state in the latest Class 2A coaches’ poll.

“We just played a really solid second period,” Goldsworthy said. “We wore them out. They were tired. When you do that you can get a lot of scoring chances in a short amount of time.”

Maple Grove (7-1-1) played its best in the third period, when it pulled to within 4-2 before an empty net goal by Minnetonka’s Mason Hendrickson with 54 seconds left clinched the victory.

“We only played one period of hockey, and you can’t take any periods off against the No. 1 team in the state.” Maple Grove coach Todd Berglund said. “Our compete level wasn’t there (in the first and second periods), and we learned a valuable lesson from that game.”

Berglund said Minnetonka is among the best teams Maple Grove has faced this season, comparing favorably to the likes of Edina and Blaine.

“They are polished,” Berglund said. “They move the puck well. They transition well through the neutral zone.”

Junior forward Teddy Lagerback scored twice in the second period and senior goaltender Charlie Glockner made 13 saves as defending state Class 2A champion Minnetonka remained unbeaten with a 5-2 victory over previously unbeaten Maple Grove on Friday at the Tradition in the Park holiday tournament at the St. Louis Park Rec Center.

Lagerback’s goals came in a span of 5 minutes, 21 seconds and bookended a three-goal Minnetonka flurry that also included a goal by Skippers’ junior forward Griffin Streeter. Lagerback’s second goal put the Skippers ahead 4-1 with 36 seconds left in the second period.