Small-school Mahtomedi stands out in the land of hockey giants

The Zephyrs are celebrating 65 years of hockey and with it, a chance to build toward something more. 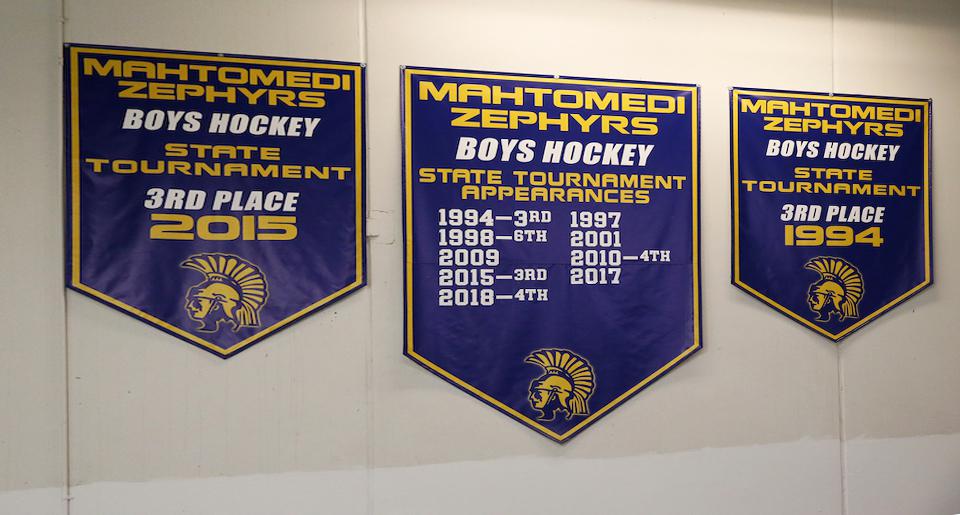 Mahtomedi boys' hockey has become one of the more successful small-school programs in the modern era. Photo by Cheryl Myers, SportsEngine

Since its inception in 1954, the Mahtomedi boys’ hockey program has been building toward a bigger future.

At first, it was getting skaters on the ice. Then it was playing at a consistent level. Now, 65 years later and amid a season reflecting on the past with pride, Mahtomedi is working on a more ambitious achievement: Penning a new narrative about a program often overlooked among the giants of Minnesota high school hockey.

There are plenty of storied hockey programs in Minnesota, the ones that seem to always make the state tournaments and find their players featured on an annual YouTube video showcasing the best hockey hair.

Although Mahtomedi hasn’t always been included in that conversation — simply because it hasn’t found as much state tournament success — the Zephyrs have been quite successful and boast a roster of heavyweights who have come through the program.

St. Thomas Academy, which earned the most small-school state titles (five) before moving to Class 2A in 2013, trailed No. 6-ranked Mahtomedi by four spots in the analysis; Orono, the next metro-area public school on the list, was ranked No. 15.

Oftentimes, Mahtomedi isn’t lumped together with some of the historical storied programs. We’ve heard stories about the program and the rich history of the program for many years, and this is really the first year we’re taking the initiative to celebrate it.

The article buoyed proud Zephyrs to highlight a fact few knew — even those within the program — that Mahtomedi is a Class 1A contender with a resume comparable to many of the state's top-tier teams.

Some felt the findings needed to be promoted, and as luck would have it, an opportunity to do so was at hand this season with the program celebrating its 65th anniversary.

“Oftentimes, Mahtomedi isn’t lumped together with some of the historical storied programs,” said the team's current head coach, Jeff Poeschl. “We’ve heard stories about the program and the rich history of the program for many years, and this is really the first year we’re taking the initiative to celebrate it.”

From hand-me-downs to titles and trophies

Mahtomedi's rich history was sown when the school's graduating class of '54 donated funds to build an outdoor rink on the high school grounds. But an ice rink was all the money could pay for, so students and fans used the snow surrounding the ice sheet to construct benches and seating for onlookers.

The squad's first jerseys were purple and gold hand-me-downs from its big brother athletic program — the Zephyr football team. A year later, the school secured the team its own jerseys with the more familiar navy and gold colors.

Organized and coached by Chuck Gilbertson, the Zephyrs played their first hockey game on Dec. 29, 1954 — a 6-4 overtime loss to St. Paul Park, despite two goals from senior co-captain Dick Flaherty. Nearly a month later, he played the pivotal role in Mahtomedi's first victory, scoring twice in a 2-1 decision over Stillwater on Jan. 21, 1955.

In its first season on ice, the young Zephyrs hockey program borrowed the football team's jerseys and played on a rink paid for by the senior class. Contributed photo

Four years later, Mahtomedi qualified for its first region playoff (there weren’t automatic section playoffs then), where it defeated Osseo 4-2 on Feb. 4, 1959 before being eliminated two days later by Mounds View.

In the 1959-60 season — Gilbertson's sixth and final year as coach — the Zephyrs clinched their first Skyline Conference Championship with a 5-1 win against Osseo.

Stan Getchell took over as coach in 1960 and during his four-year tenure, the Skyline Conference moved league games indoors in 1962-63. Getchell coached the Zephyrs to back-to-back conference championships in 1962 and 1963.

Warren Strelow, an assistant on the 1980 “Miracle on Ice” gold medal-winning Olympic men’s hockey team and again on 2002’s silver medal-winning squad, was Mahtomedi's next coach, spending 19 years leading the Zephyrs (from 1964 to 1983). A member of the Minnesota High School Coaches Hall of Fame and the U.S. Hockey Hall of Fame, Strelow guided Mahtomedi to three conference titles — in 1966, 1967 and 1978 — while also serving as goaltending coach for a Golden Gophers program that won three NCAA Division I titles in 1974, 1976 and 1979.

Jeff Whisler took over for Strelow in 1983 but left in 1987 to coach his alma mater, Hill-Murray, where he stayed for four years and won a state championship in 1991. His return to Mahtomedi in the following season nearly coincided with the advent of the two-tier system (which was put in place in 1991), and the two events combined to catapult the Zephyrs to new heights. They made their first state tournament in 1992.

Under Whisler, a member of the Minnesota Hockey Coaches Hall of Fame’s Class of 2004, Mahtomedi had seven winning seasons, captured three section titles and earned third place at the 1994 state tournament.

Progress and success extends beyond the program's rich history of coaches. Players from the Mahtomedi hockey program have soared to some of the highest individual heights.

In comparison, 14 Warroad-born players and four from Hermantown have been drafted in the NHL, according to the website Elite Prospects.

The comparisons and stories have surprised even the most loyal Zephyrs.

“I never really knew the history of Mahtomedi hockey, so [learning] everything was fun,” Zephyrs assistant coach Alex Rogosheske said. “I don’t think anybody in town knows the history.

“I think we’re a real hidden gem,” said Rogosheske, who, after captaining the 1999 Zephyrs and playing Division I hockey at Bowling Green, returned to Mahtomedi to live, work and, of course, help coach hockey.

That’s part of what this 65th anniversary celebration is about: Bringing an awareness, a sense of pride, to a small school and community that might not be as cognizant of how Zephyr hockey got to where it is today.

Mahtomedi's season-long celebration to spotlight the past and present — while promoting a future that could keep the program rising — has included several special pieces.

But one of the biggest tips of the cap to Zephyr hockey history are the new uniforms, which are designed to tell a story and evoke the early days of the program.

Mahtomedi's successes — the section titles and tournament appearances, the top-notch coaches and the athletes-turned-stand-up citizens — have come without the benefit of real home arena, a situation that could change soon and bring the Zephyrs back to where they started.

Mahtomedi's only home ice was its first rink, the one that built by donations from the 1954 senior class. From there, the team moved into a number of different venues, from Polar Arena in North St. Paul to the State Fairgrounds in Falcon Heights, before landing at St. Croix Valley Recreation Center, which the Zephyrs currently share with the main tenant, Stillwater.

The walls and ceilings of that arena are adorned with red and black, not blue and gold, and a trophy case holds only those from the Ponies' achievements.

Craig Roberts, a Mahtomedi resident and hockey historian who helped shape this season’s celebrations, likened the program to a budding rock ‘n’ roll band looking for venues in which to play.

The search may be coming to an end.

On Dec. 18, the planning commission for the city of Grant, Minn., which borders Mahtomedi to the east, unanimously approved a plan to build a hockey arena on the Mahtomedi High School campus. The measure goes next to the Grant City Council, which is expected to discuss the proposal at its Feb. 5 meeting. 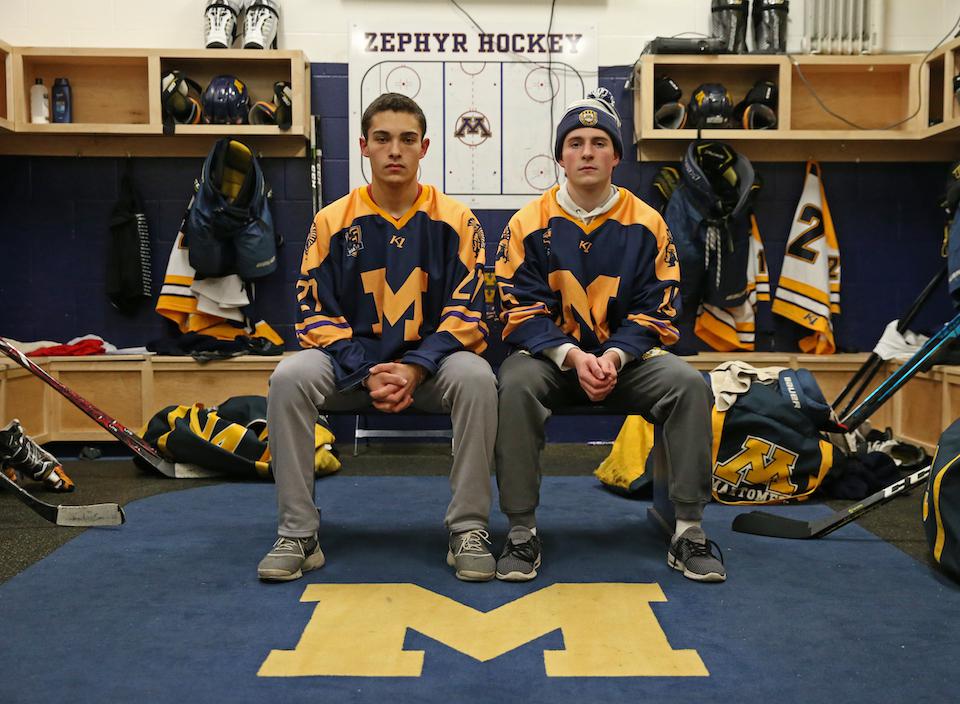 Zephyrs seniors Tommy Broten (left) and Nikolai Dulak are proud to wear this season's commemorative jerseys and represent the community. “I think our little town does a great job of supporting the team,” Broten said. Photo by Cheryl Myers, SportsEngine

A home rink doesn’t necessarily make a team successful, but it gives a program a chance for its players to hone their skills on their time, adds flexibility to scheduling where the program call the shots and generates an additional sense of pride — with trophy cases, to boot, Roberts said.

“A home rink allows you to do something else,” Roberts added. “That’s tell your story.”

Proponents say a home arena is the next step in bolstering Mahtomedi’s program, especially with a budding youth hockey program that’s finally seeing the fruits of years of labor.

Zephyrs co-captain Tommy Broten said most Mahtomedi youth hockey coaches are dads who have been through the Mahtomedi program. In turn, the youth program parents bring their families to high school hockey games and some youth players are even part of the 65th anniversary celebrations.

“I think our little town does a great job of supporting the team,” Broten said.

A rich history and storied program

From past to present and in the future, Mahtomedi's story has been shaped from within, and most believe it will continue that way.

Poeschel said he's not letting the lack of a home rink become an excuse for a lapse in achievement, adding that the program has and will continue developing players wherever the team hosts games.

“It’s not a woe-is-me [thing],” Poeschel said. “But it’s in spite of not having our own rink, we have been able to develop. We’ve just kind of said, ‘OK, who cares?’ We’re still going to take this head-on.

“I think that’s a testament to the perseverance of the program to be able to work through that.”

The proof is in the program's long record of achievement that Poeschel and others hope will be recognized as one of the State of Hockey's storied programs alongside Edina, Warroad and St. Thomas Academy.