Legendary coach could play, too 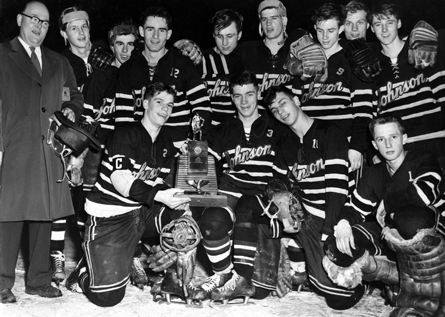 Herb Brooks the coach has inspired countless books and movies and, more recently, a YouTube video of a chubby-cheeked little kid dressed in a sport coat and tie reciting (dramatic pauses and all) Brooks’ legendary 1980 “Miracle on Ice” pregame speech.

Herb Brooks the player? Well, he is more anonymous than famous.

Long before Brooks was the fiery coach guiding the U.S. hockey team to its stunning triumph over the mighty Soviet Union juggernaut at Lake Placid, N.Y., he was honing his skills on St. Paul’s outdoor rinks. 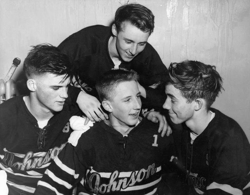 Herb Brooks, back row, described winning a state high school title as "very gratifying because it represented the guys I grew up with in the neighborhood." Courtesy Photo

“Growing up in St. Paul I was a typical youth hockey player that hung around the rink and just fell in love with the game," Brooks is quoted as saying in Ross Bernstein’s biography on Brooks titled "America’s Coach: Life Lessons & Wisdom for Gold Medal Success."

Brooks played for St. Paul Johnson, the dominant Twin Cities high school program in the 1940s and 50s, an era when the balance of Minnesota high school hockey power sat squarely in northern towns such as Eveleth, Roseau, Warroad and Thief River Falls.

Brooks was a senior forward on the 1955 Johnson team that beat Minneapolis Southwest 3-1 for the state title.

A two-year varsity player, Brooks also played in the state tournament in 1954, when the Governors finished third.

“They were damn good,” Jack McCartan said about the Johnson teams in the 50s.

McCartan, two years older than Brooks, played at St. Paul Marshall and was the star goaltender of the 1960 U.S. Olympic hockey team that won the gold medal in Squaw Valley, Calif. As a player, Brooks is best known for being one of the final, excruciating cuts from that Olympic team.

“Herbie was a hard working guy,” McCartan said. “He would get his points, but he wasn’t a prolific goal scorer. He was a good skater and a great team man.”

Brooks, who died in a single-car crash near Forest Lake on August 11, 2003, was the star of the 1955 state title game, scoring two goals in Johnson’s triumph over Southwest.

"I think I was just like any other kid in that when I had a chance to finally make my high school team, it was a big thrill,” Brooks said in Bernstein’s book. “Then, to win the state championship was very gratifying because it represented the guys I grew up with in the neighborhood. It was a grass-roots type of thrill, and those things stay with you for the rest of your life."

Brooks played at the University of Minnesota after high school, and played on the 1964 and 1968 Olympic teams.

“He was a good player,” said John Gilbert, the former state hockey writer for the Star Tribune who wrote "Herb Brooks: The Inside Story of a Hockey Mastermind." “He would be the first to tell you he may not have been the best player on his (high school) line. But he was a great skater.

“I have a great quote from John Mayasich (the Eveleth native who starred on the 1960 Olympic team) that I used in my book that tells it all. ‘As a player, Herb Brooks was a fantastic skater. Herb Brooks was the best skater any of us have ever seen.’

Read more about Herb Brooks' selection in the Top 100