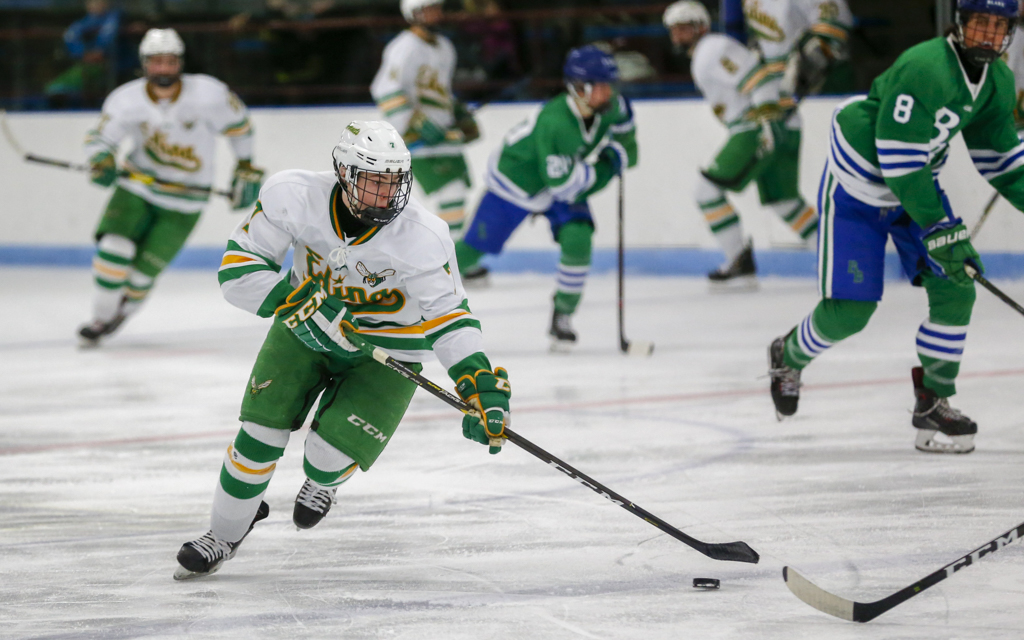 Edina's Liam Malmquist carries the puck into the offensive zone against Blake. Malmquist had two goals in the Hornets' 4-2 victory over the Bears. Photo by Jeff Lawler, SportsEngine 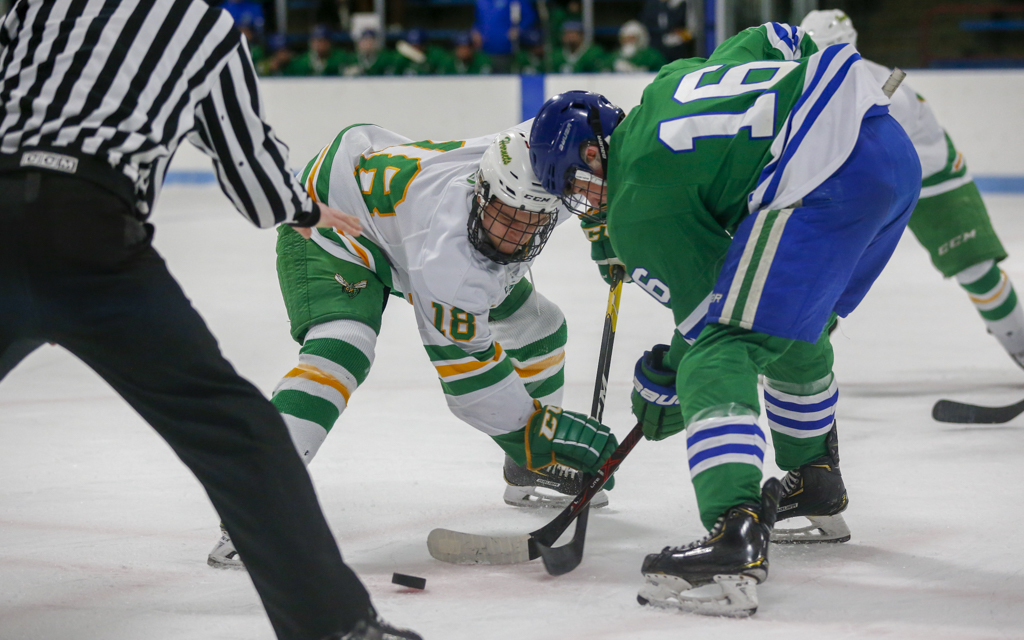 Edina's Mason Nevers battles Blake's Tristan Broz in the faceoff circle Saturday in the Class 2A Section 6 semifinal. Nevers had a goal and an assist in the Hornets' 4-2 victory. Photo by Jeff Lawler, SportsEngine

First came the Carlsons and the Fretlands. Then the Hankinsons — Peter, Ben and Casey. More recently, there have been the Eversons, Nannes and Walkers.

Edina’s hockey bloodlines are among the best in the state. It’s no coincidence its teams are, too. The latest legendary combination of brothers is the Malmquists, with senior forward Liam the final in a trio of high-scoring forwards that started with Dylan, one of the Hornets’ all-time scoring leaders, giving way to super sniper Garrett.

Edina coach Curt Giles, who has had at least one Malmquist on his team since 2011, isn’t much for first names when it comes to identifying the brothers.

“I just call them Malmquist,” he said.

“Malmquist” had another superb game Saturday, scoring twice to lead the top-seeded Hornets, who are ranked No. 1 in the Class 2A state coaches' poll, past No. 4 seed Blake 4-2 in a Class 2A, Section 6 semifinal at Bloomington Ice Garden.

“This one here, he’s got great finishing touch, he handles the puck really, really well, sees the ice extremely well,” Giles said. "He’s a competitor, too.”

Liam blasted a slapshot home early in the second period to put Edina (23-2-1) ahead 2-1, then added the clincher with 5:25 remaining when a loose puck caromed onto his stick in the slot. He had a gaping net at which to shoot, and he found it to put the Hornets ahead 4-1. He has 26 goals this season, second best on the team.

“I kind of play a little different from both of them,” Liam sad. “I don’t know, my older brother Dylan is more of power forward, using his strength just to beat out guys. My other brother Garrett was just a pure sniper.

“I think my game, is kind of like (linemate Kevin Delaney’s). Work the interior, move around and set picks to get us open and make smart plays.”

Delaney, a senior who set up Malmquist’s first goal, is also 5-9, 155. That leaves plenty of room on their forward line for Brett Chorske, the 6-4 center nicknamed The Condor.

“We call him that because of his wingspan, he’s just a big bird,” Delaney said about Chorske, son of Tom Chorske, Minnesota’s first Mr. Hockey award winner. “He’s an awesome playmaker and great at faceoffs.”

Chorske won a first-period faceoff directly back to defenseman Mason Reiners, who snapped a shot into the right corner of the net from the blue line to tie the score at 1.

Blake (17-8-2), meanwhile, showcased a couple of Malmquist-like players in sophomores Joe Miller and Tristan Broz, each of whom had a goal. The duo’s strong play wasn’t enough to carry a Bears team that has just two seniors and was making its debut in a Class 2A section semifinal.

“They’ve got seriously bright futures ahead of them,” Blake coach Greg May said about Miller and Broz. “It was a big stage for a lot of our guys, the first Section Saturday that they have played in. I’m proud of the way they fought.”

Edina’s Mason Nevers and Liam Malmquist scored 49 seconds apart in the second period to propel No. 1 seeded Hornets past unranked and No. 4 seeded Blake 4-2 on Saturday in a Class 2A, Section 6 semifinal at Bloomington Ice Garden.

The goals from Nevers and Malmquist came from close range as Edina (23-2-1) sustained heavy pressure on the Bears and goaltender Aksel Reid for much of the second, earning a 10-2 advantage in shots on goal and a 3-1 lead. The goal was Malmquist’s 25th of the season, second most among the Hornets, ranked No. 1 in the Class 2A state coaches' poll.

Nevers bumped his season total to 18 with a third-period goal, banging a loose puck into an empty net to put the Hornets ahead 3-1.

Blake’s Tristan Broz capped the scoring with a goal with 1:16 left.

Blake (17-8-2) opened the scoring in the first period on a power-play goal by Joe Miller. Stationed to the left of Edina goaltender Louden Hogg, Miller one-timed a hard pass through the slot from Tristan Broz 6:56 into the period.

Edina’s Jason Reiners tied it at 1 with 8:04 left in the first period when he took a face-off win from Brett Chorske and snapped a shot high into the right corner of the net. The goal was the second of the season for Reiners, a senior defenseman who also scored in Edina’s 7-0 section quarterfinal victory over Hopkins.

Reid finished with 28 saves while Edina’s Louden Hogg had 14. 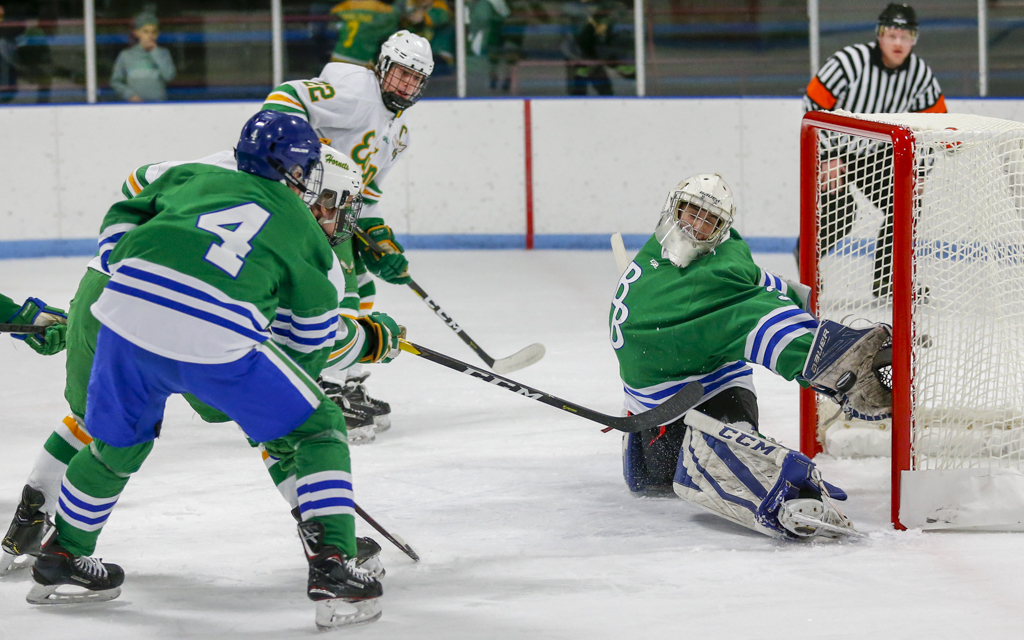 Blake goalie Aksel Reid stretches for a glove save in the first period against Edina. The Bears fell to the Hornets 4-2 their Class 2A, Section 6 semifinal game. Photo by Jeff Lawler, SportsEngine