Greenway is state tourney-bound after taking down Hermantown in Class 1A, Section 7 final

Donte Lawson scored the game winner in double overtime to send the Raiders to their first state tournament since 2001. 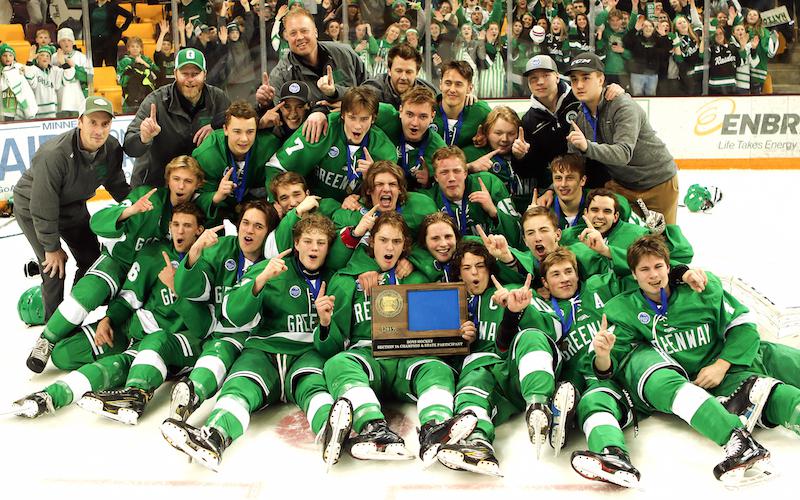 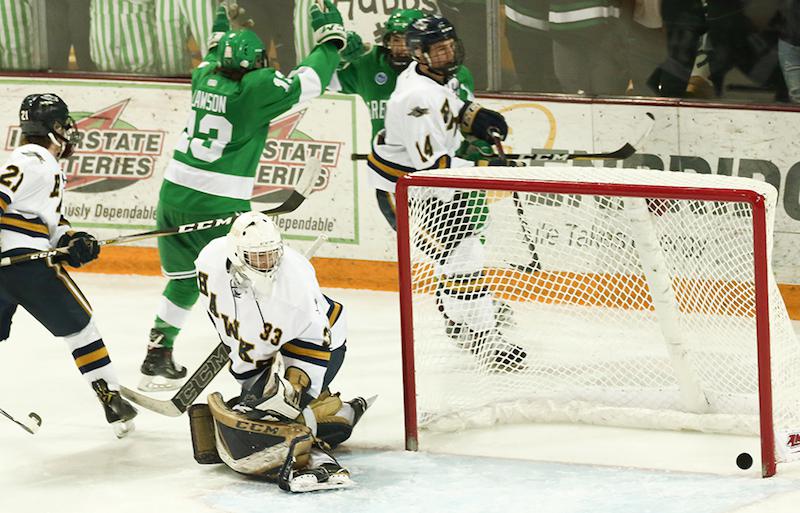 Donte Lawson (No. 13) scored the game-winning goal Wednesday night against Hermantown. The Raiders, who won 3-2, advance to their first state tournament since 2001. Photo by Dave Harwig, SportsEngine

Greenway/Nashwauk-Keewatin coach Grant Clafton has been building toward this moment for over three years. His team’s senior captains had lost 9-0 to Hermantown three years ago as sophomores, and suffered a 5-4, double overtime loss in last year’s Class 1A, Section 7 final.

Clafton’s Raiders had lost the teams’ regular-season meeting 4-0 on Jan. 15 — but Clafton refused to buy the hype over the Hawks’ dominance.

“It does not matter,” he said. “I don’t believe in the ‘poor me’ and all this stuff. If you believe, you can get it done.”

And they got it done: Greenway beat Hermantown 3-2 in double overtime Wednesday, upending a program that has claimed nine straight state tournament berths. In winning the Class 1A, Section 7 championship, the Raiders advance to their first state tournament since 2001. 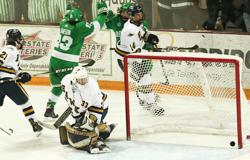 Despite an early Hermantown shot barrage, the Raiders showed they wouldn’t go quietly and scored the game’s first goal 6:38 into the first period. Donte Lawson fed Ben Troumbly in front of the net, who popped the puck past Hermantown goaltender Cole Manahan for the early lead.

As the period wore on, however, Hermantown’s steady pressure paid off. First Aaron Pionk fired in a shot to tie the game at one, and less than a minute later, Blake Biondi powered past a Raider defenseman and gave the Hawks a 2-1 lead.

After the difficult first period, the Raiders slowly began to turn the tide. They outshot the Hawks 29-28 the rest of the way, and the two teams began to trade punches. The forward duo of Troumbly and Lawson generated strong odd-man chances late in the second, and Troumbly shook his way past the Hawk defense and tied the game with a strong individual effort midway through the second period.

“Once we had momentum on our side, we were rolling,” said Troumbly. “We were rolling two lines, but we didn’t even feel it.”

The third period grew cagey, as each team probed for chances. Biondi and Hermantown’s formidable top line generated the best opportunities of the period, but the Wright held them in check, and the Hawks and Raiders headed to overtime for a second consecutive season.

Both teams erupted in the first overtime, going back and forth with high-quality chances. Late in the period, Manahan stopped Lawson on a breakaway and three additional golden Greenway chances in quick succession. The back-and-forth blows continued in the second overtime, and after defenseman Aaron Elich rushed the puck deep into the Hermantown end and fired off a shot from a tight angle, Lawson found himself in the right spot.

“I knew what I had to do,” said Lawson. “It happened fast, and I knew that if I just put the puck on the net, good things would happen.”

Manahan made 37 saves in a losing effort for Hermantown (22-4-2), which misses the state tournament for the first time since 2009. Greenway (15-13) advances to its ninth state tournament, and first in Class 1A.

For Clafton, the win was a defining moment for his storied program, and his belief never wavered.

“The message was always that we were winning this game,” he said. “That’s what it was. End of discussion.”

In 2019, that discussion ended with a Raider section title. 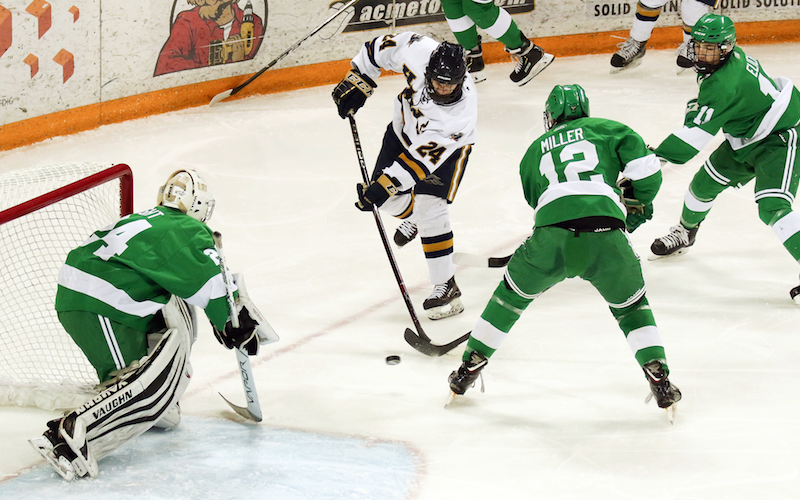 Hermantown's Ethan Lund shoots the puck Wednesday night at Amsoil Arena in Duluth. The Hawks, who have appeared in nine straight Class 1A state tournaments, lost to Greenway, 3-2, in the Section 7 final. Photo by Dave Harwig, SportsEngine

A dynasty came to an end at Amsoil Arena on Wednesday night.

The third-seeded Raiders (15-13-0) pulled off a stunning upset over a Hawks team that had been to nine straight state tournaments, including back-to-back Class 1A titles in 2016 and 2017.

The game had an inauspicious start for the Raiders, who gave up 22 shots on goal in the first period. Junior goaltender Logan Wright made 20 of his 48 saves on the night, however, and the Raiders opened the scoring with a goal from junior forward Ben Troumbly.

The Hawks (22-4-2) replied with two goals in less than a minute from Aaron Pionk and Blake Biondi.

Troumby tied the game at two midway through the second period, setting the stage for Lawson’s overtime heroics.