Mahtomedi gets a little payback with third straight trip to state

The Zephyrs' freshman goaltender Ben Dardis made 22 saves in a 5-0 victory over Totino-Grace in the Class 1A, Section 4 title game that avenged a defeat to the Eagles earlier this season. 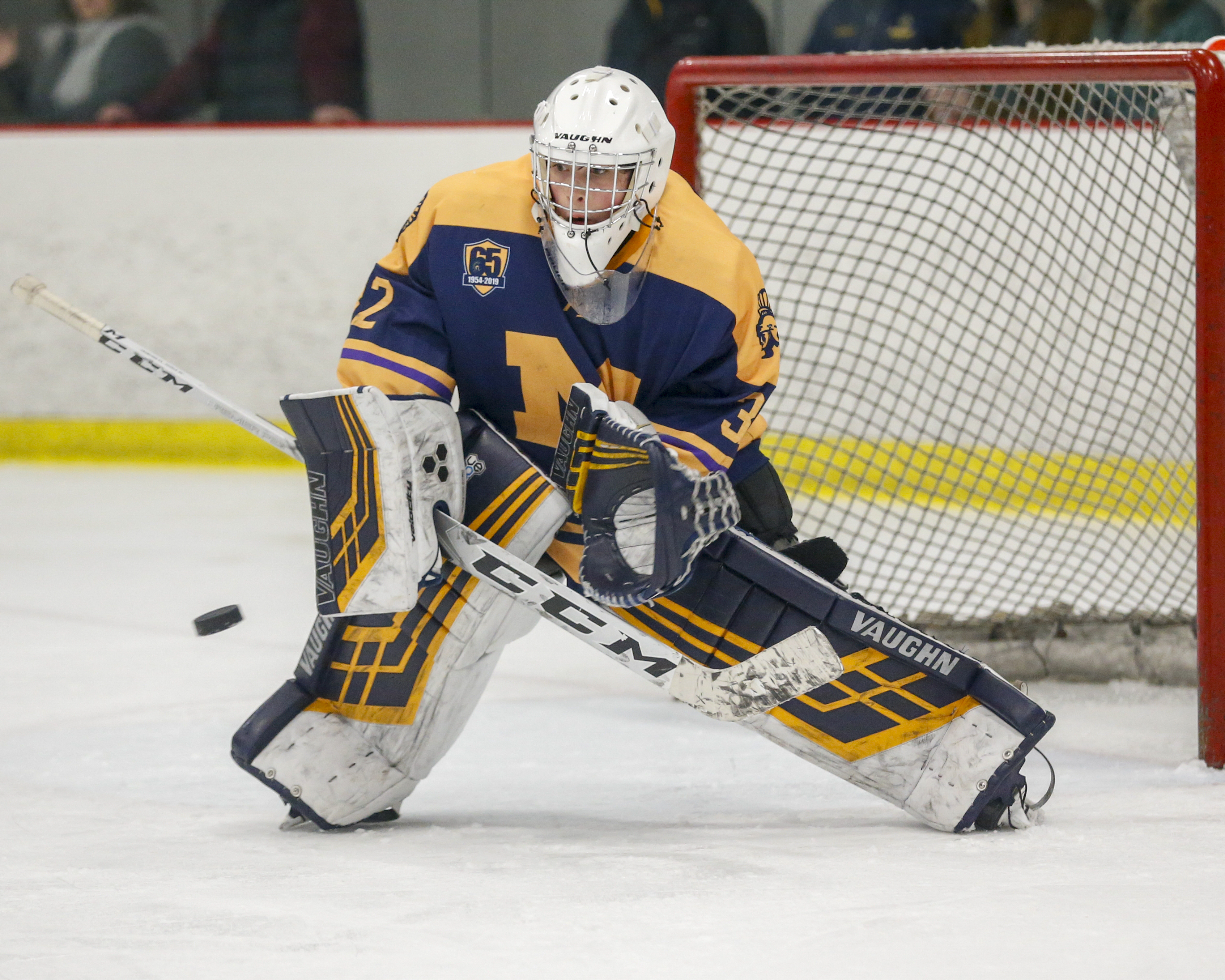 Mahtomedi's Ben Dardis tracks a Totino-Grace shot late in the third period of the Class 1A Section 4 championship. Dardis turned away 22 shots in the Zephyrs' 5-0 victory over the Eagles. Photo by Jeff Lawler, SportsEngine

Mahtomedi freshman goaltender Ben Dardis started this fall on the AA bantam team before he tried out for varsity and made it.

Now he already has a section championship shutout to his name.

“We knew he was good, but we didn’t know if he would make the jump,” coach Jeff Poeschl said. “He’s just handled every test that has been placed in front of him.”

Dardis made 22 saves in the 5-0 shutout Friday as No. 2-ranked Mahtomedi defeated No. 3-ranked Totino-Grace for the Class 1A, Section 4 title at Roseville Ice Arena.

The Zephyrs outshot the Eagles 33-22, backed by solid defense and stellar goaltending.

Mahtomedi took a 2-0 lead in the first period with goals from Nikolai Dulak and Adam Johnson, who scored with 47.2 seconds left in the period.

Sophomore JD Metz made it 3-0 just 1 minute, 43 seconds into the second period for his fourth multi-point game of the season. Kory Pilarski and Colin Hagstrom added goals in the third period.

The Zephyrs' defense shut down the Eagles, and Dardis came up particularly big with a two outstanding saves on an Eagles power play early in the third. The goaltender credited his teammates for blocking shots and shutting down the Totino-Grace rushes all game.

“They made it easy for me,” Dardis said.

“This is a sweet game to avenge that,” Poeschl said.

They return to state for the third consecutive year and 11th time overall. 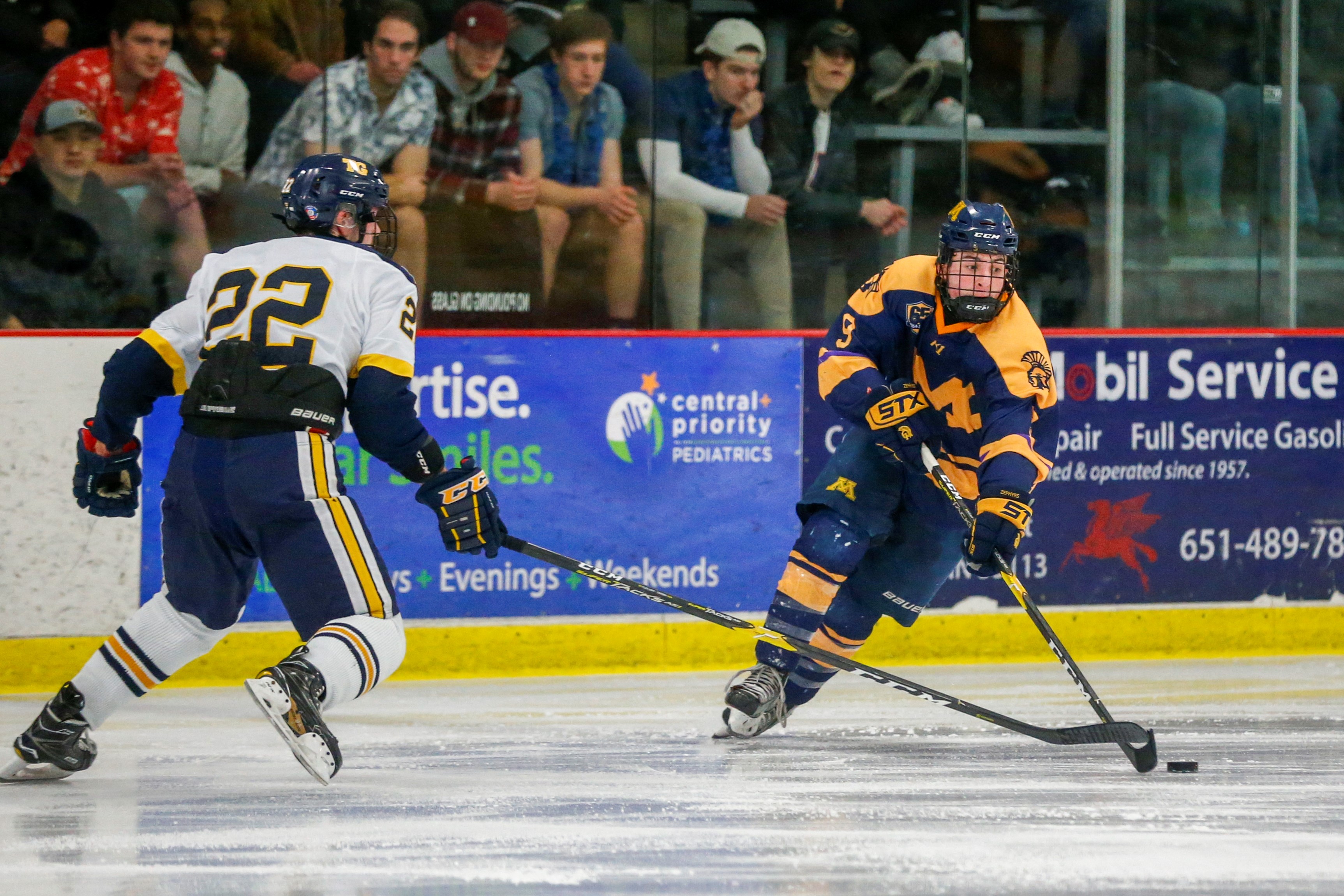 Mahtomedi's Nikolai Dulak carries the puck into the offensive zone against Totino-Grace Friday night in Roseville. Dulak had a goal and an assist as the Zephyrs defeated the Eagles 5-0. Photo by Jeff Lawler, SportsEngine

For the third consecutive year, Mahtomedi is headed back to the state tournament.

The No. 2-ranked Zephyrs got a goal and assist each from Nikolai Dulak and JD Metz en route to a 5-0 victory over Totino-Grace, ranked No. 3 in Class 1A and the top seed in Section 4.

Mahtomedi took a 2-0 lead in the first period Friday at Roseville Ice Arena on goals from Dulak and Adam Johnson. Metz made it 3-0 just 1 minute, 43 seconds into the second period. Kory Pilarski and Colin Hagstrom added goals in the third period. 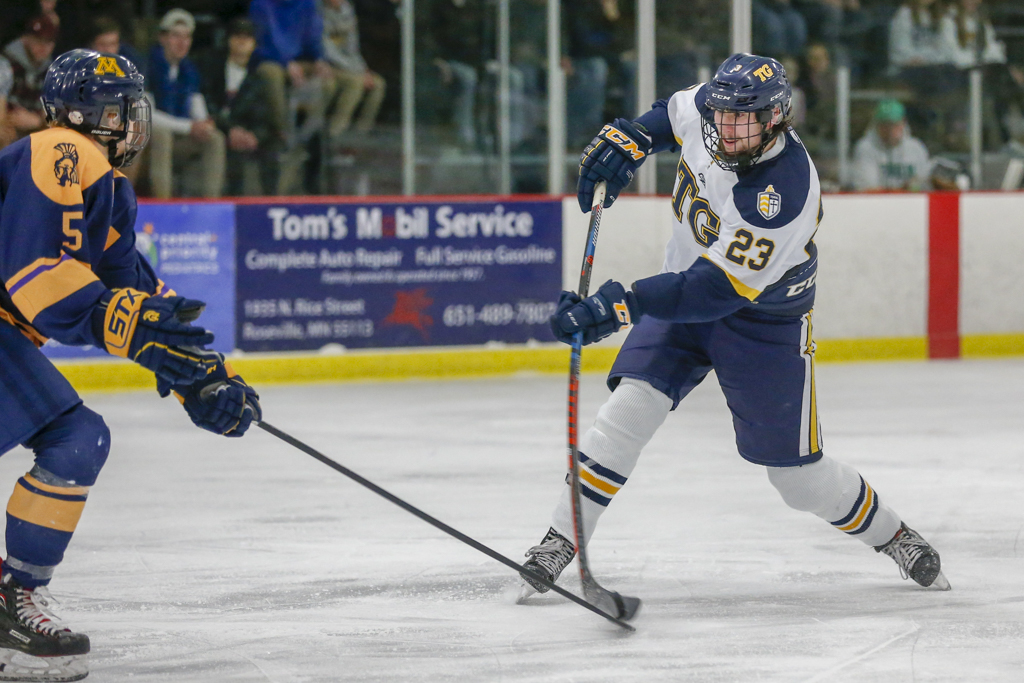 Totino-Grace's Kyle Heffron fires a shot on goal against Mahtomedi Friday night. The Eagles fell to the Zephyrs 5-0. Photo by Jeff Lawler, SportsEngine