Stampede for the Mustangs? 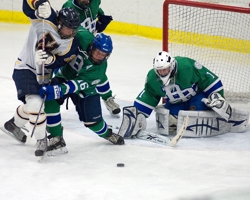 If past history is any indication – and it most certainly is – then defending state Class A champion Breck is a virtual lock to again represent Section 2A at the state tournament this winter.

For four straight seasons, the winner of the private school battle between heated rivals Breck (23-2-0) and Blake (16-8-1) has qualified for the state tournament. Blake went three consecutive years from 2006-08 until Breck broke the string and won a state title. This winter, the top-seeded Mustangs twice defeated their Tri-Metro rival, winning 7-1 on Jan. 28 and 5-1 in the regular season finale Feb. 20.

The Mustangs returned 20 letterwinners from last year’s state title team, making them a heavy favorite to repeat when the season began. Other than an overtime loss to St. Thomas Academy in early December, Breck has done nothing to dispel that notion. They are one of the top offensive units in the state, averaging 7.40 goals per game, led by three 20-goal scorers in Tyson Fulton (33), Mike Morin (29) and Chase Nystedt (26). Fifteen players have at least 10 points and 14 have scored at least five goals.

But it really starts in the defensive zone for Breck, where All-State goaltender John Russell is back and is a true anchor for coach Les Larson’s bunch. He was a difference-maker in the state finals last year against Warroad and is a calm, three-year starter.

No. 3 Blake may again find itself atop the section, but probably not for another year. The Bears are a young team loaded with juniors such as George Ordway, Donald Chute and goaltender Ryan Bullock. Next winter, Blake will be the senior-laden team with varsity experience, a pretty potent combination.

Among the remaining programs in the section, which is a good mix of private and public schools, figures to winnow down to a challenger for Breck.

Wright County Conference public schools Delano/Rockford (16-7-2), Orono (15-9-1) and Mound-Westonka (11-9-5) grabbed the No. 2, No. 4 and No. 5 seeds, respectively, and are closely matched. All three feature starting goaltenders with save percentages over .900 in Jason Dzurik, David Crotteau and Aaron Davis. None have had quite the impact of Davis, however, as he leads the state in save percentage and has the White Hawks over .500 despite scoring just 2.12 goals a game. 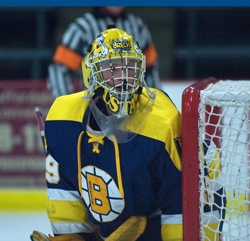 Some of the most accomplished goaltenders in the state could make for some low-scoring, tightly-contested games across the board – well, perhaps except when the powerful Breck offense is on the ice. Mound-Westonka’s Aaron Davis leads the state in save percentage, while Breck’s John Russell (pictured at right) and Delano’s Jason Dzurik aren’t that far off the pace.

Coach Doug Runke called Davis the “backbone of our team,” and a true competitor with terrific reaction time and an uncanny ability to focus on the puck through screens. Also able to control his rebounds well, Davis has been tough to beat. Just once on the season has he allowed more than four goals (a 5-0 loss to Warroad on Dec. 4) and 12 times in 23 games has Davis allowed one goal or fewer.

Should the White Hawks get past the quarterfinals, they’ll run into No. 1 Breck – and the showdown between Davis and the Mustangs offense would be something to behold.

While Breck’s offense will create plenty of match-up problems all across the ice, there are other top players in the bracket. Delano has a terrific offensive/defensive combination with powerful Tyler Heinonen and Nick McLain, as does Orono with Ross Luedtke and Ted Ylitalo. 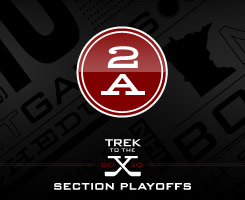 In returning 20 letterwinners from last year’s state championship team, Breck certainly pegged itself as an overwhelming favorite to repeat. They’ve only stumbled once to a high school team all season (an early overtime loss to St. Thomas Academy), but have been rolling ever since. The Mustangs have no apparent weaknesses, beginning in goal with John Russell and extending all the way through the roster.

What’s more high-scoring, a World Cup soccer match or a Mound-Westonka game? It’s a close call thanks to White Hawks’ goaltender Aaron Davis, who leads the state in save percentage (.948) and allows just 1.82 goals per game. Of course, Mound-Westonka only scores 2.12 goals per game. But keeping games tight is the White Hawks' specialty and should make them a tough out.