The horn sounds on one of metro area’s most storied prep hockey programs. 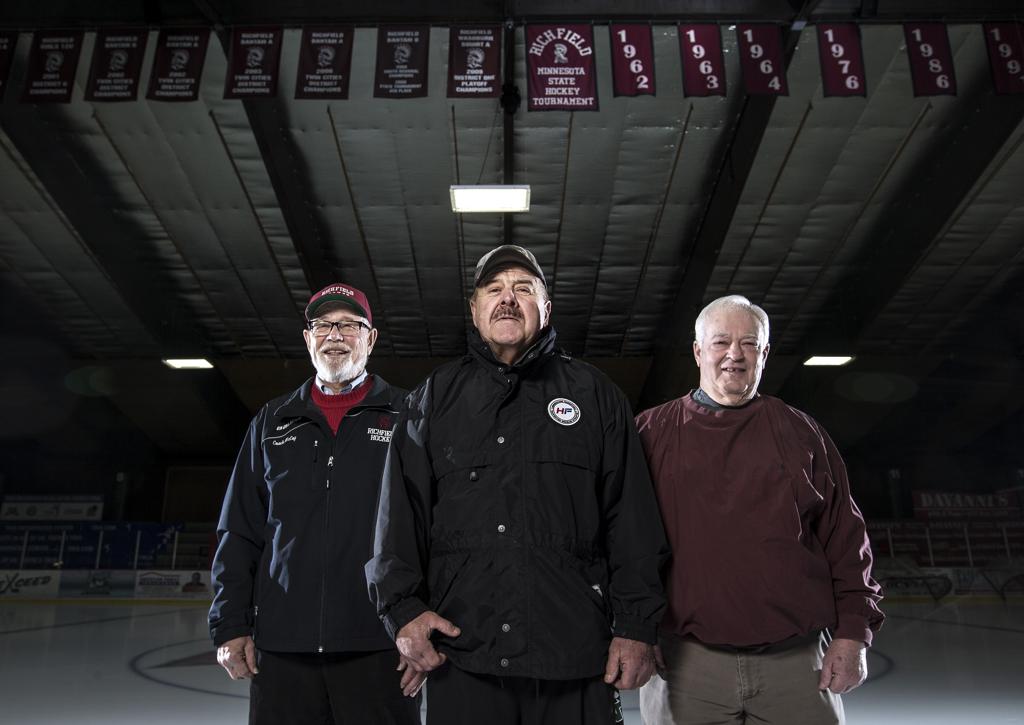 Five once-powerful metro hockey programs that are no more

VIDEO: Richfield hockey: The end of an era

Richfield’s many outdoor skating rinks were once packed with youngsters dreaming of someday playing high school hockey for the hometown Spartans. Those youngsters, many playing nightly under the lights, would build a legacy of success — six appearances in the old one-class, eight-team state tournament, including a championship game appearance in 1976.

Now those same outdoor rinks stand quiet and mostly empty. There are no more dreams of growing up to be Spartans.

The team no longer exists, and is unlikely to ever return.

“It definitely hits you,” said Darby Hendrickson, a current Wild assistant coach and former NHL player who was Richfield Class of 1991. “It’s the core of where you grew up. There were so many good players … my biggest goal was to make the high school varsity team. I always felt, if you could make the high school varsity team in the town you grew up in, it would be a great run.”

The decision to end the boys’ program came in November after years of declining numbers in the youth hockey association. School and city officials agree the reasons can be traced mostly to dramatic socioeconomic changes — an aging population and diverse ethnicities — that are occurring so often in first- and second-ring suburbs.

The changes leave hockey officials wondering: If it can happen to Richfield, and before to once-powerful Minneapolis programs at Roosevelt, Southwest and Washburn, who’s next?

The death of hockey at Richfield once would have been unimaginable.

The Spartans produced four NHL players: Steve Christoff, Damian Rhodes, Brett Hauer and Hendrickson. There were many epic region battles with Edina for a spot in the eight-team tourney at old Met Center — the Spartans reached the region title game nine times between 1957 and 1971 — games that often attracted as many fans as the state tourney final.

The zenith came in March 1976 when Richfield, led by an amazing three-day performance by Christoff, reached the championship game of the tournament for the only time in school history. The Saturday night final was played before 16,199 fans at the St. Paul Civic Center. Grand Rapids emerged with a 4-3 victory despite two goals and an assist by Christoff, a player longtime Richfield coach Jake McCoy called “one that comes along every century.”

But it was the one shot that didn’t get in that still haunts Christoff.

The Spartans were down by a goal late in the game and Christoff had control of the puck deep in the Grand Rapids zone. A quick shot at Rapids goalie Jim Jetland appeared, ever so briefly, headed into the net for a tie game.

“He kicked out a skate,” Christoff said. “I can still picture the puck hitting his skate blade. [The loss] was a thorn in our side for a long time.”

Christoff led all tournament scorers with nine points on five goals and four assists, stamping, it seemed, Richfield as a legitimate state power. Christoff became a star with the Gophers and the 1980 Olympic champion team. He traces his success to those Richfield outdoor rinks — he didn’t have an indoor practice until high school.

“We’d race to the rink after school and spend the whole afternoon and night just skating,” he said. “There was a warming house, and it was always crowded. Just a lot of kids playing hockey.”

As late as 1980 Richfield had 19 outdoor rinks and staffed 13 warming houses, according to Jim Topitzhofer, the city’s recreation services director. Now there are 11 outdoor rinks, which most nights are barely used, the reason the city now only staffs two warming houses. The Richfield girls’ program was disbanded in 2011 and now co-ops with Holy Angels.

David Boie, in his first year as Richfield athletic director, was raised in Richfield and is one of those self-described childhood rink rats.

“It kills me personally, to think Richfield is not having a hockey team,” Boie said. “[The program] means a lot to a lot of people. It’s a very special thing in this town and to realize where we’ve gotten to …”

Richfield’s story dates to the years immediately after World War II, when returning soldiers armed with the GI bill bought starter homes that sprang up on what had been farmland faster than you could count them. The city planned well, with a multitude of parks and playgrounds, and benefited from a strong school system.

Many residents had well-paying jobs at the airport and the Ford plant nearby in St. Paul. Richfield was the epitome of a Baby Boomer city — by the mid-1970s the high school was the largest in the state.

Athletic success became synonymous with the school. The basketball team (only boys were playing at the time) was ranked No. 1 in the state much of 1961 and in 1960 played one of the greatest tournament games ever in a semifinal loss to Edgerton. Baseball won four state championships between 1962-72. Football reached the state’s final eight 10 times between 1972-94, twice reaching the championship game.

“In the 1960s, they were the elite, probably the finest all-around program in all sports in the state,’’ former Burnsville hockey coach Tom Osiecki said. “They were incredible in basketball, certainly hockey was good, and football and baseball were unbelievable. To be where they are now, and not even field a hockey team, it’s just shocking.’’

“It was a big piece of the community,” he said. “The parents were largely blue-collar and had a very powerful work ethic, and that was passed on to the kids. It was very much a part of their life.”

Jake McCoy, who was involved in the hockey program for 50 years as a head coach or assistant, called Richfield’s players “tough kids. You played Richfield, and you knew you had been in a game.”

The city’s residents embraced a team whose toughness and work ethic matched that of the community. McCoy said that during many regular-season games at the Richfield Arena fans “were standing three-deep and there wasn’t a place to park in the entire parking lot. It was the band, the yelling and screaming. It really did mean something to the community.”

‘The kids were crying’

The book closed on Richfield hockey in a Nov. 19 meeting between Boie, second-year coach Dave Shute — a former Richfield player — and current team players and parents. The Spartans had 19 players at the start of summer drills, but when winter practice officially started, only 10 remained. The hope was that some of the nine would reconsider, and the team practiced for more than a week before its fate became apparent.

“It was real tough,” Shute said. “I’m crying, the kids were crying. It’s one of the hardest things I’ve ever had to tell the kids.”

Boie and Shute said the hope was to get through this season because the team had several strong seniors. The likelihood, both said, is that the program would have folded — or found a partner to co-op with — by next season. The team was unable to find a co-op partner this season, leaving players to join other amateur youth teams.

It had been apparent to everyone around the program that it was in serious trouble for years. Former athletic director Todd Olson, who retired after last year, said the warning signs could be seen as far back as 2000. A move by youth hockey officials to merge with Washburn’s youth program lasted for only one year; Olson said too many in the community remembered what Richfield had once been and did not favor a co-op.

Richfield routinely had about 200 players from mites through bantam in the early 2000s. By 2009-10, a year after the short-lived merger with Washburn, Richfield had 109 players. The school disbanded its junior varsity team in 2009, depriving the high school of its natural feeder program.

“You could tell the numbers were collapsing,” said Jack Stallon, an all-conference defenseman on the 2013-14 team. “I wouldn’t want to say it was a matter of time, but you could say the end was near.”

“We’ve been seeing it since my freshman year,” said Bailey Olson, who was one of only two seniors on last year’s team, along with John Krohn. “Even then there was talk of a merger, or co-op. But at the time we wanted to keep it Richfield.”

Richfield entered a youth partnership in 2010-11 with Bloomington Kennedy, which is now in its sixth season. But the co-op didn’t stem the tide of Richfield’s declining numbers, and in addition there was migration from Richfield by families who wanted a winning hockey high school experience.

Bailey Olson said a number of players he skated with as a youngster moved, or open-enrolled, at schools like Jefferson or opted for the city’s private school, Holy Angels.

What happened, especially in retrospect, is no mystery. Richfield, whose Spartans played in the state’s final one-class hockey tournament in 1991, has fewer children (under 18) — they are in only 25 percent of the city’s homes, according to city census data — and is more diverse with more families below the poverty line. At the same time, hockey continues to become more expensive, costing players between $2,000 and $5,000 — or as much as parents choose to spend — to play and train for top travel programs.

“I don’t know if we could have done anything to stop it, because of the socioeconomics,” said former coach Mike Thomas. “Hockey has become a very expensive sport.”

The school district has more than 60 percent of students qualify for free/reduced lunch, compared with just 25 percent in 1998-99, according to city statistics.

As late as 2000, Richfield’s population was 81.2 percent white, according to census statistics. Now, minorities make up two-thirds of the senior high school population. Greater diversity does not bring with it childhood dreams of playing hockey.

Richfield is not an island when it comes to hockey participation concerns. Start in Minneapolis and move out, to first-ring suburbs such as Richfield, New Hope, Columbia Heights and St. Louis Park, and then to second-ring ones like Bloomington and Burnsville, and there are worries about hockey’s future based on declining numbers of youth skaters.

“It’s a prominent discussion at every District 6 youth hockey board meeting,” Kennedy President Mike Walton said of the drop in numbers in programs such as Kennedy, Jefferson and Burnsville.

“You do think if people like Darby Hendrickson and, say, someone like myself that had some prominence in hockey, what if we could have done something else?” Christoff said. “You kind of think, ‘Geez, I didn’t do much to help.’ So you do feel a little sad about that.”

Hendrickson, too, wonders if something else might have been done. Could a program have been created to get youngsters affordable, used hockey equipment? Help with ice time? Anything?

“I’m still trying to put it together and understand what happened,” he said. “It’s still sinking in — it’s hard to believe.”

But Darby’s father, Larry Hendrickson, coach of the ’76 Spartans, said hockey has simply entered a new era in which expenses are too high for many families.

“The whole world of hockey has changed,” Larry said. “It’s become a business. … Richfield is a changing community, and most of the kids just can’t afford to play.”

The future? Boie said he will explore co-op possibilities for next season. But there are no guarantees, he said. If Kennedy needs to co-op, Boie said, Bloomington school officials might want it to be with Jefferson. Holy Angels is a private school, and might not be keen on cutting tuition-paying kids to take in Richfield skaters.

Most agree a co-op is the only way to give Richfield students a chance to continue playing. The school simply doesn’t have the players to make a team.