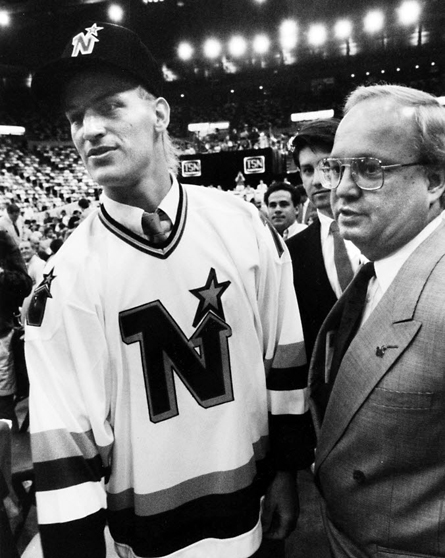 Doug Zmolek, left, was surprised to be taken with the seventh overall pick by the Minnesota North Stars and general manager Jack Ferreira, right, in the 1989 NHL Draft at the Met Sports Center in Bloomington. Star Tribune file photo

A big, strong, skilled defenseman who capped an outstanding career at Rochester John Marshall with an oh-so-close run at the state title as a senior, Zmolek knew NHL teams were interested.

“My parents were debating if we were even going to go to the draft, and it was at the Met Center (in Bloomington),” Zmolek said. “I look back at it and giggle. First round? We didn’t have any inkling that I was even going to be drafted.

“My parents were great. But they were from Iowa and they didn’t know anything about hockey. We got to the draft and thought, ‘What are we doing here?’ ” 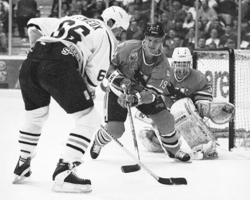 It didn’t take long for the Zmoleks to get their answer.

Zmolek was selected by the Minnesota North Stars with the seventh overall selection. It was a surreal moment for the Zmoleks -- and all of Minnesota hockey for that matter. The only Minnesota high school player taken higher in the draft was South St. Paul’s Phil Housley, who went with the sixth overall pick to Buffalo in 1982.

“I take a lot of pride in it,” Zmolek, who played 467 regular season games in an NHL career that spanned eight seasons, said about the ’89 Draft. “Obviously it wasn’t hyped up to where it is now. Back then it was very neat.”

A four-year varsity regular for the Rockets who was a Mr. Hockey finalist in 1989, Zmolek was a 6-foot-2, 200-pound plus combination of brute-force sledgehammer and precision-cut Exacto knife. Along with his countless pancake body checks, Zmolek scored a combined 94 points during his junior and senior seasons.

“I remember talking after the draft to (former Minnesota North Stars scout and director of player personnel Chuck Grillo),” said Steve Webb, who covered hockey for the Rochester Post-Bulletin at the time. “He was telling me that the reason Zmolek went so high in the draft was because he was really good at making that first pass out of his own zone.

“He was also one of those tough, raw-boned guys. He would score goals in high school just because he was better than a lot of other high school players.”

Zmolek said his best high school memory came as a junior in 1988, when the Rockets erased years of playoff frustration by beating Apple Valley 2-1 in the Region 1 championship game. The victory ended an eight-year state tournament drought for John Marshall.

“We had watched lots of JM teams get beat in the past,” said Zmolek, who lives in Rochester with his wife, Jenny, and their four children. “So to finally win and get to the state tournament is something I’ll never forget. The feeling you had, really that next day, is something I won’t forget.”

John Marshall, a team loaded with seniors, made an early exit at the state tournament, losing 4-3 to Hill-Murray in the quarterfinals and 5-2 to Grand Rapids in the consolation round.

The next season, with Zmolek and longtime friend and defense partner Eric Means among the few Rockets standouts remaining in the lineup, John Marshall made a surprising return appearance at the state tournament.

“We didn’t have all the big name players,” Zmolek said. “We lost five to six Division I type players from the year before. The team we had, to get where we got and to do what we did was amazing. Nobody expected that.”

In the championship game against Bloomington Jefferson, Zmolek scored twice in the second period to give the Rockets a 2-1 lead.

“That game kind of signified Doug through high school and in college,” Means said about Zmolek, who went on to a stellar career at the University of Minnesota. “The bigger the game was, the better he played.

“He was extremely good that game, there was no question about it. We had a power play in overtime that game as well. I remember the Jefferson goalie made a great save (on Zmolek) in overtime, otherwise he would have had a hat trick.”

“I often wonder what it would feel like to have won that game,” said Zmolek, who is the head of hockey operations for Rochester’s youth hockey organization. “Just knowing you were right there, one goal away.”

Read more about Doug Zmolek's selection into the Top 100