Ahead of his time

Warroad's Max Oshie, who scored 12 goals in a single game, is Top 100 selection

* The Minnesota State High School League does not officially recognize Oshie's 12 goals in a Jan. 6, 1948 game
against Thief River Falls as the state's single-game record.

Max Oshie, the first in a long line of Warroad greats, had size and skills of modern-day stars 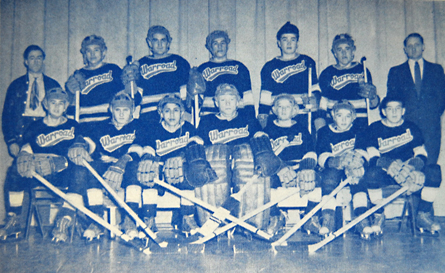 Max Oshie, back row, third from right, never left the ice during the 1948 state tournament when Warroad lost to Eveleth in the championship game. Photo courtesy of Vintage Minnesota Hockey

Three state high school players each had seven-goal games during the 2008-09 season. It was widely reported that all three (Ben Hanowski of Little Falls, Michael Unzen of Moose Lake and Dan Billar of Mankato East) had tied the single-game goal scoring record held by former Eveleth scoring machine John Mayasich.

The publicity from that unlikely series of seven-goal games shook loose another, much older account of an even more mind-boggling scoring outburst. Turns out Oshie scored an amazing 12 goals against Thief River Falls on Jan. 6, 1948, according to a Warroad Pioneer article recounting the game.

Adding validity to the report is Orv “Beno” Kofstad’s first-person account of the feat. 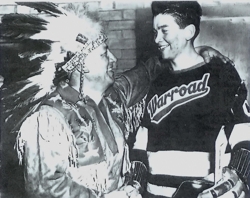 “I was on the ice when he did it,” said Kofstad, a Warriors defenseman who, like Oshie, was a senior co-captain during the 1947-48 season.

Kofstad, who went on to referee high school hockey for 30 years, said Oshie was as dominant as any of the dozen or so legendary players who suited up for Warroad in succeeding years.

“He was the best, absolutely the best,” said Kofstad, who still lives in Warroad. “He had basically most of the qualities that Henry Boucha had, or any of the Christian brothers.”

Oshie had above-average size -- he was a stocky 6-foot-1 -- to go along with exceptional stickhandling and skating ability. His combination of size and skills was rarely seen in the 1940s, when organized hockey in the state still was in its infancy.

“He was a big guy, and you didn’t see big hockey players like that in those days," said Willard Ikola, the former Eveleth goaltender who faced Oshie and the Warriors in the championship of the 1948 state tournament.

During his legendary run as Edina's head coach, Ikola led his Hornets against Warroad and Boucha, widely considered the best player of his era, in the championship game of the 1969 state tournament.

“(Oshie) sure reminded me a lot of Henry Boucha,” Ikola said. “Oshie was very skilled. He did everything. He was their best player, their leader. You remember him because he could shoot the puck, stickhandle and skate.”

Eveleth beat Warroad 8-2 for the championship that season. Oshie, who died in 2006 at age 78, scored a goal in the title game and finished the state tournament with five goals and four assists in three games. He was one of eight players named to the all-tournament team.

Warroad, making its first state tournament appearance, had just 12 players on its roster. Kofstad said he and Oshie never went to the bench during their three games at the St. Paul Auditorium, playing every minute of all three games. Oshie would line up at center to start a game, and he would “rest” by occasionally moving back to defense.

"I remember playing Eveleth like it was yesterday," Max Oshie said in an interview with his nephew, Tim Oshie, on February 19, 2006. "We stuck with them (Eveleth) for one period but just ran out of gas. Most of our players never left the ice in the tournament and Eveleth just wore us down.”

“It was the greatest feeling playing for Warroad High School, the city, and all the fans. I'll never, ever forget the feeling skating in front of so many people. The big city of St. Paul and all the tall buildings. I'd never seen (buildings) like that before and St. Paul had so many of them," Max Oshie said in the interview with his nephew.

Upon returning to Warroad, the hockey team was greeted with a rousing reception.

“We parked the cars outside the schoolhouse,” Max Oshie said. “Then we started walking to the gymnasium. At that point, all the town folks started carrying all the players on their shoulders into the building. That was very special for us.”