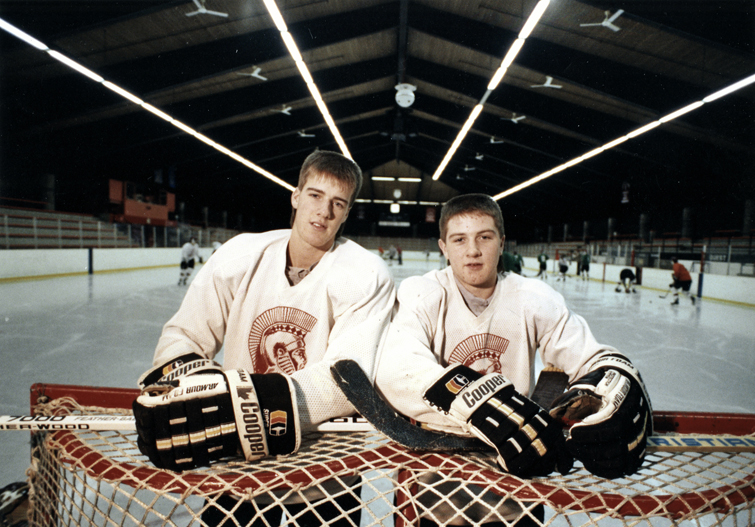 If everything went off as planned, Darby Hendrickson knew there was a good chance the police would be called.

And still he forged ahead.

“We rolled the dice quite a few times,” Hendrickson said.

With his younger brother, Dan, at his side, Hendrickson would gather a group of neighborhood buddies. Their destination was a park just down the street from the Hendricksons’ Richfield home. 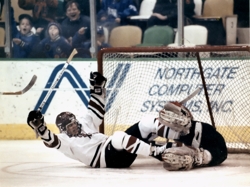 Richfield's Darby Hendrickson scores against Eden Prairie's Trent Fielder during the Spartans' 4-3 win over the Eagles in the 1991 Section 6 semifinals at the Met Sports Center. Star Tribune file photo

Down came the tennis court net. On came the roller blades.

“We would get some pretty good games going,” Darby Hendrickson said. “It was just a matter of how long we could go before cops came and kicked us off. Then we would have to move it to the streets, which wasn’t as good because the surface wasn’t as smooth.”

Whether it was boot hockey in the winter or roller hockey in the summer -- the Hendricksons were always at the center of the action.

“It seemed like every season we were either playing hockey on the street or the tennis court or the rink,” Dan Hendrickson said. “Darby definitely led the charge.”

Darby and Dan, who is two years younger, always split up for those neighborhood games. The way Dan tells it, Darby would stack his teams with the group's older players.

With the Hendricksons playing on the same line in 1990-91, Richfield was exceedingly tough to beat. The Spartans reached the state tournament in emotional fashion, ending the 33-year career of iconic Edina coach Willard Ikola with a 4-2 triumph over the Hornets at a raucous Met Sport Center in Bloomington.

Brandon Steege, who had played in the state tournament for Burnsville the previous season, had transferred to Richfield. Steege joined the Hendricksons on the Spartans’ top line. Richfield entered the 1991 state tournament with a 21-2-1 record. No team in the field had fewer losses.

“That experience was unbelievable,” Darby Hendrickson said. “You dream of it, you watch it growing up.

“What makes it really fun is the guys you are with. You are there with your brother, the guys you grew up playing roller hockey with. It’s not just about you.”

After a scoreless first period, Darby Hendrickson scored 39 seconds into the second in Richfield’s state quarterfinal matchup against Duluth East. The Greyhounds tied the score at 1 heading into the third, when they scored four unanswered goals en route to a 5-1 victory.

Richfield beat Roseau 4-3 and Bloomington Kennedy 6-1 to win the consolation title. Darby Hendrickson finished the tournament with four goals and two assists. He was named Mr. Hockey, earning the award given to the state’s top senior. 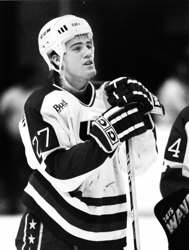 Darby Hendrickson played for the U.S. in the 1994 Olympics. Star Tribune file photo

“Good vision -- he had that too. That’s from being at the park.”

Larry Hendrickson also worked as a strength coach when Darby and Dan were growing up. The Hendrickson’s two-car garage was a converted into a fully stocked weight room. Pro and college players were workout regulars. Even kids from neighboring communities and rival teams were welcomed at “Hendy’s Garage “

The Hendrickson boys never were pushed by their father to enhance their hockey skills by lifting weights.

Darby, who was a chiseled 6-foot, 185-pounds as a high school senior, said Dan was bench pressing 315 pounds as a freshman.

“To this day my dad has never said you have to work out and you need to do this or that to get better,” Darby said. “You just sort of fell into that. Naturally you were motivated. Getting stronger when I was younger, that was a big help. Especially in high school.”

Hendrickson, a varsity regular since he was a freshman, scored 174 points. He totaled 32 goals and 29 assists in 27 games as a senior.

“Darby did everything his senior year,” Dan Hendrickson said. “He was a goal scorer, he was a leader, he was a playmaker.”

“He was great at everything he has done, including being a brother.”

Darby Hendrickson scored 53 points as a freshman at the University of Minnesota, and he played for the Gophers for one more season before joining the U.S. national team. Hendrickson played in the 1994 Olympics, then spent 10 seasons in the NHL. Hendrickson, who played in 518 games, scored the Minnesota Wild’s first goal on Oct. 11, 2000, against Philadelphia at the Xcel Energy Center in St. Paul.

Hendrickson served as a studio analyst for FOX Sports North and for KSTC-TV, Channel 45’s coverage of the state high school hockey tournament. He is an assistant coach for the Wild and lives in the Twin Cities with his wife Dana and their four children: Mason, Addison, Beckett and Rennick.