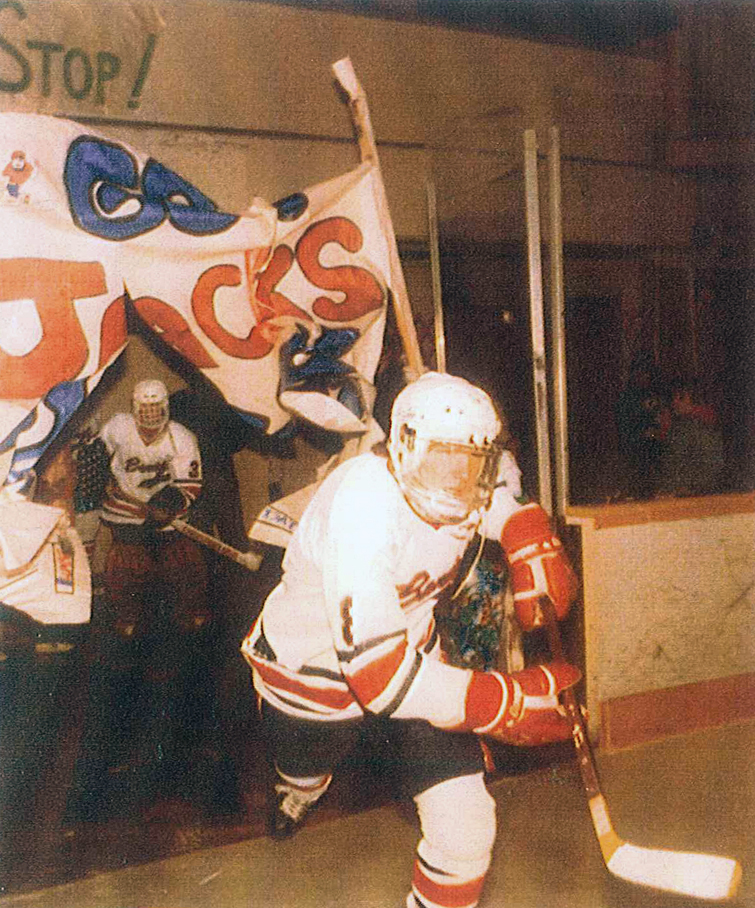 Accuracy wasn’t much of a concern for Bemidji’s George Pelawa.

At 6-foot-3, 240 pounds, Pelawa took a simplified approach to shooting and scoring.

“If you gave him a pass, he would just try to bury it by shooting as hard as he could; he would put the puck right through the goaltender,” said Jason Meyer, Pelawa’s Lumberjacks linemate for two seasons. “If nothing else, he would knock over a couple of people and just keep whacking at the rebound and get it in that way, too.”

There were times when Pelawa’s game simply was too big for his high school opponents. Goalies often felt the brunt of the mismatch.

Meyer remembers playing in Baudette when Pelawa uncorked one of his cannon shots to dramatic – and scary – effect.

“He hit the goalie right square on the mask and dropped him right on his back,” Meyer said. “He dented the kid’s mask. It was a big dent.

“I skated right by him and saw his eyes rolled in the back of his head.”

The shaken goaltender made a full recovery. Bemidji won the game. 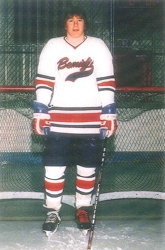 Pelawa, who bench pressed 310 pounds, also was Bemidji’s fastest skater. His combination of power and speed was unlike anything the state has ever seen.

One of Pelawa’s many nicknames was, “The Great White Shark.” Another common label: “The Gentle Giant.”

“Some people say he was a gentle giant,” Meyer said. “I wouldn’t go that far. On the football field and hockey rink he wasn’t gentle by any means.”

Pelawa was an all-state football selection as a senior when he rushed for 516 yards and 13 touchdowns on just 52 carries. He also intercepted three passes and recovered four fumbles as a standout linebacker.

Several Big Ten schools, including Minnesota, were offering Pelawa football scholarships long before he caught the attention of college and pro hockey scouts. As a high school sophomore in his first varsity season, Pelawa managed nine assists and zero goals. He had scored 39 goals on Bemidji’s VFW state championship Bantam team as a freshman the season before, so his surprising goal-scoring drought (numerous Pelawa shots clanged off goalposts) was a featured topic in the locker room and around town.

On a statewide level, Pelawa didn’t become a household name until he reached the state tournament as a junior in 1985. Although Bemidji lost 5-3 to eventual state champion Burnsville in the quarterfinals and 3-0 to Minnetonka in the consolation round, Pelawa’s physical play and soft touch with the puck had scouts drooling. He finished his junior season with 26 goals and 11 assists.

“It was just fun to talk to him because he was always upbeat,” former Warroad coach Tom King said. “But when he put the skates on and the hockey stick in his hand, he turned into some kind of machine.

“Man, when he rocked you, he rocked you. He probably had the most impact of any player I had ever seen, hitting-wise.”

Pelawa had goal and an assist in the Lumberjacks’ quarterfinal matchup with Hibbing, a team Bemidji had defeated by a comfortable margin late in the regular season. The Bluejackets pulled off a 4-3 upset, and Bemidji again was relegated to the consolation round.

The Lumberjacks beat Richfield and Bloomington Jefferson to win the consolation title. Pelawa had three goals and five assists in the three games and was named to the all-tournament team for the second straight year.

Pelawa was named Mr. Hockey after the state tournament, topping a field of finalists that included two-time state champion Scott Bloom of Burnsville.

“As a sophomore, he was awkward,” said Steve Peters, Bemidji’s goaltender who graduated with Pelawa. “He didn’t have the skill. He wasn’t a good skater.

“By the time he filled out as a senior he was dominating. He put guys through the glass. Off the ice, he was a teddy bear. One of the nicest guys in the room.”

“I was a small goalie, too,” Peters said. “He was one of the guys who could scare you with his shot. It was heavy, hard and high. I don’t know if he had a whole lot of control on it, he just tried to push it through you.

“There were times, I wouldn’t admit it then, but in practice if he was coming down the wing on a 1-0, I would step aside. It wouldn’t be worth it.”

Pelawa was drafted in the first round, 16th overall, by the Calgary Flames in the spring of 1986. Although there was talk of Pelawa making the jump straight to professional hockey, he was instead set on joining Peters at the University of North Dakota.