It's tenuous at the top 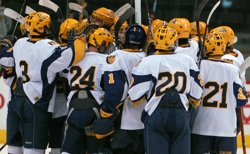 It's Minnetonka and Wayzata and everyone else in Class AA. In Class A, Breck and St. Thomas Academy are the dominant teams.

But where do the No. 3s -- Eden Prairie (Class AA) and Mahtomedi (Class A) -- fit in the mix? Are Hill-Murray and Hermantown capable of winning Class AA and A titles, respectively?

A statewide panel of coaches and media members had its final say on who belongs where in the Hub's weekly rankings, but now, with the playoffs underway, the rankings that matter most ultimately will be decided on the ice.

In Class A, Mahtomedi knocked St. Thomas Academy out of the No. 1 spot thanks to a 6-3 triumph in the regular season finale. Those teams are expected to meet again in the Section 4A final. Looking ahead, the winner of that game very well might face Breck in the state tournament.

Wayzata, which started the season unranked, has climbed all the way to No. 2. The Trojans even stole a few No. 1 votes from Minnetonka this week. Those teams, after two regular season ties, could meet in the Section 6AA final, assuming both survive what will be semifinal showdowns against high-caliber opponents.